The Little Willies – For The Good Times 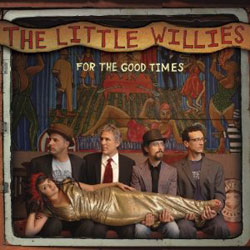 It’s been six years since The Little Willies released their debut, self-titled album, and in that time it sounds as if Norah Jones and her rowdy friends have loosened up considerably. For The Good Times finds The Little Willies – named after their unabashed admiration for Willie Nelson – tearing through another set of long-lost country covers with twang to spare and virtuoso musicianship in spades.

Jones plays a fine front woman when surrounded by such a stellar cast. You can almost hear the sigh of relief as the spotlight shifts from her to the band in full, and she sounds right at home in this context. Her piano playing has got a nice jazz undercurrent to it, and her vocal persona shifts from twangy cowgirl (Loretta Lynn’s Fist City) to breathy chanteuse (Dolly Parton’s Jolene and Scotty Wiseman’s Remember Me) effortlessly, painting this set of country standards with a refreshingly modern – but still reverently nostalgic – feel.

And around her – rather than behind her, out of the spotlight, strumming and stomping in the dark corners of the stage – The Little Willies make music to grin, dance, and drink to with reckless abandon. Richard Julian plays second guitar and shares the vocal work, and the interplay between his voice and Jones’ is at times fun and carefree (the Cal Martin barn-burner Diesel Smoke, Dangerous Curves and Lefty Frizzell‘s If You’ve Got The Money, I’ve Got The Time), and at others heartrending and fragile (Permanently Lonely).

Guitarist Jim Campilongo shines on Telecaster, and he’s got the head-spinning licks to impress even the most cynical listener, though his presence is used more of an accent this time out, sounding laid back and accentual rather than show-stealing. His solo on the Johnny Cash song Wide Open Road and his stunning baritone work on Fist City push these covers past the standard realm of chord charts and shuffling feet into full-blown, by-god tunes, and ones well worth spinning over and over. And bassist Lee Alexander and drummer Dan Rieser form a nimbly chugging rhythm section sure to keep any roadhouse’s dance floor full past midnight.

The music here works on many levels, from the archetypal country lyrics (“If you’re gonna stay away, baby, you got to let me know how to cook our biscuits, how to roll the dough”) to the well-worn familiarity that comes from a great band of confident pickers playing in top form. The Little Willies deal in equal parts reverence for their source material and a fun-loving and admirable desire to update these tunes for a new audience. It’s a tricky line to toe, but Jones and friends walk it with great aplomb and gusto.

Fans of Jones’s solo work may find For The Good Times a bit too country for their taste, but anyone who was won over by their debut will find a lot more to love about this new outing.

The Little Willies MP3s or CDs

The Little Willies on Spotify