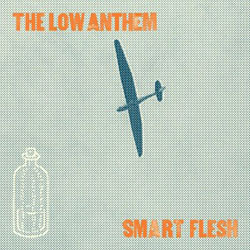 After the success of second album Oh My God, Charlie Darwin in 2009 – originally self-released and then later picked up by Bella Union in the UK – The Low Anthem now bring us this enigmatically named sequel.�No longer the unknowns, ready to surprise everyone with their “sleeper” breakthrough, how will this follow-up fare?

An overriding sense of sobriety, gravity and the sombre side of life are the first notes that come through, both musically and lyrically.�Troubled women are evoked in both Ghost Woman Blues, and Apothecary Love, whose heroine is “numbed from the voices in your head / conspiracy delusions that your boyfriend kept fed”.�Ashes are, movingly, left unscattered, watching over the narrator (a son?) as he eats his breakfast (I’ll Take Out Your Ashes).�Lovers feel “the smarting flesh / Of the wound we have undressed”.�Often this is backed by stately, slow, serious sounding music – from the minor key plaintive piano and vocal harmonies of the opener to the deep, mellow yet sad woodwind that is found on several tracks (Golden Cattle, Ghost Woman Blues).�A singing saw adds an eerie, keening, unsettling edge on Burn.

As was commonly observed on …Charlie Darwin, the range of influences and similarities here are again worn on the band’s sleeves.�That Bella Union-esque Fleet Foxes / Bon Iver recorded-in-the-woods harmonising-through-our-beards quality is tangible in Ghost Woman Blues, Love And Altar and Golden Cattle, but the band are more enjoyable when channelling Leonard Cohen, as they do admirably and successfully on album stand-out Burn.�Whether deliberate homage or coincidental (if striking) similarity, both the vocal and the lyrics on this track are very Cohen-like: with wry lines like “what I told you, lover, I guess that I meant”, and the previously quoted “smarting wound”, all embellished with Hammond organ and delivered a slow, deep voice.�Meanwhile Hey, All You Hippies gives a good impression Bob Dylan, as it tells the long-hairs to “Go get a job, don’t work for your father / He ain’t the salt of the earth”.

The problem here is that all these competing styles result in a bit of a lack in a distinctive voice for the band.�Yet the other stand-out track, Apothecary Love, is quite marvellous, and feels most like the authentic sound that they are perhaps most comfortable in making.�A plink-plonk country waltz, telling the tale of a budding romance with some enjoyable recurring lines and rhymes, this has the album’s best lyrical description, talking of the love interest’s “saccharine lustre”.

The words used are a reliable source of pleasure throughout, with the only two exceptions being the lovely almost-classical sounding instrumental track Wire, and Matter Of Time – unaccountably crammed full of lyrical clich�s of the “I know she will be mine”, “howling at the moon” kind.

The most animation – a kind of passion and anger – can be heard on 9/11 track Boeing 737.�Here we hear, perhaps for the only time on the album, some real and vivid urgency.�It suits them.