The Maccabees – Wall Of Arms

by Michael Cragg
published: 4 May 2009 in Album Reviews
Tweet 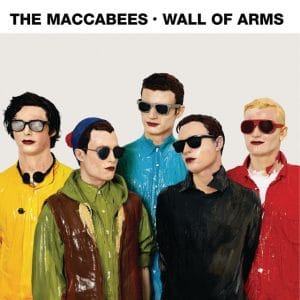 Surprise has been expressed in some quarters that Brighton’s The Maccabees have managed to follow up 2007’s debut, Colour It In, with something quite brilliant. It’s not that their debut wasn’t any good – it features a handful of fantastic singles – but rather that they’re a band that little was expected from, especially given the indie death knell that rang at the end of last year, when cheap synths seemed to take over from battered guitars and indie landfill sites were overflowing.

Dismissed as lightweight by some, the band have used their debut as a platform for Wall Of Arms, a far more accomplished album that toys with the dreaded ‘m’ word: maturity. Gone are the playful, youthful lyrics about toothpaste kisses and innocuous fleeting moments with the opposite sex. Instead, singer Orlando Weeks’ yelping, bruised voice wraps itself around tales of relationship suicide (the excellent One Hand Holding), death (Young Lions) and love (just about everything else). That’s not to say it’s boring, or mature like U2 are mature (ie. dull), it’s just that it knows what it’s doing and sounds confident in its own skin.

Drafting in producer Markus Dravs (Björk, Coldplay, Arcade Fire‘s Neon Bible) to accentuate the dramatic tension in their songs is a masterstroke. The songs sound alive and passionate, augmented by distant backing vocals, blaring horns, rolling drums and those trademark spindly guitar lines. Opener and new single, Love You Better, is a gorgeous amalgam of all the above, with Weeks intoning mournfully over sparkling guitar; “Can we learn to love better so the words you leave me on my pillow read better?” It’s also perhaps the most obvious indication of Dravs’ influence; the subtle tension and the sudden release towards the end mixed with Weeks’ swollen vocals signify the band may have been listening to Arcade Fire’s second album for inspiration.

Elsewhere, Seventeen Hands mixes a head-spinning lyric with an expansive musical backing, taking in catchy ‘heys’ and shimmering guitar lines. Taster single No Kind Words is all tense paranoia (“if you have no kind words to say, you should say nothing more at all” – maybe Weeks has read too many reviews?), whilst Young Lions and closer Bag Of Bones are perfect examples of Weeks’ way with a pretty melody, even if the latter limits its compliments to “beautiful old bag of bones, so much more besides”.

The only minor grumble is that as the album enters its second half the songs become less memorable, mainly because there’s very little let-up in tempo. Nearly all of the 11 songs end around the three and a half minute mark, start slowly then build up, and when the tension isn’t reined in it can sometimes become overbearing, bringing to mind Editors or White Lies. But luckily, the mis-steps are few and far between and don’t detract from what is a soaring achievement. Wall Of Arms is an expansive, confident second album that takes The Maccabees from indie also-rans to genuine contenders.