The Magic Gang – Death Of The Party 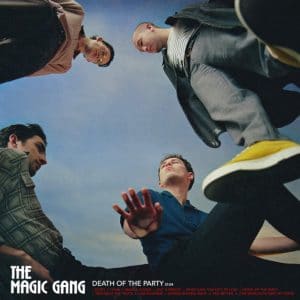 The Magic Gang are something of a throwback, in the best way. Their sound has always been predominantly bright and breezy, punctuated by sharp lyrical asides and winning melodies, but on their second album Death Of The Party the Brighton band have stepped up a gear with a collection of supremely well crafted indie pop with a soulful centre.

The album strikes a satisfying balance between effusive brass-flecked upbeat bangers, like the insistently rousing Think, and more rocking fare as the band subtly develop their sound. The title track is something akin to baroque pop, with singer Kris Smith allowing his pleasingly luxurious and smooth voice full flight to croon along and swoon you away to a lovely reverie. It all marks a logical and welcome natural progression from the band’s jangly indie beginnings.

If there’s another contemporary band that The Magic Gang share a kinship with then it’s Blossoms, who have flourished while focusing their sound to a retro ’70s beat. For The Magic Gang their sound is a mixture between freewheeling gentle funk pop, like on the hook filled floor filler Take Back The Track, and the sort of blue eyed soul pop favoured by ’80s bands – The Style Council springs to mind. “Power chords and soul,” they sing in the propulsive bop of Gonna Bounce Back, and that’s about as good a way to sum up the album as you’re going to get.

Lyrically the album finds the band in positive and joyous spirits. A welcome slice of optimism in these bleak times, there’s no self doubt or torturous foreboding to be found here. Instead, the band’s focus is on self-improvement and self-acceptance. It’s a contentment that manifests itself in their easy going confidence, making for an album that looks forward rather than back, and recognises that better days may yet be to come.

Quirky, idiosyncratic and unafraid to go against the grain, The Magic Gang have forged their own merry path to find success. Wide-eyed, ebullient and self assured, Death Of The Party is a welcome late summer ray of light.

The Magic Gang MP3s or CDs

The Magic Gang on Spotify