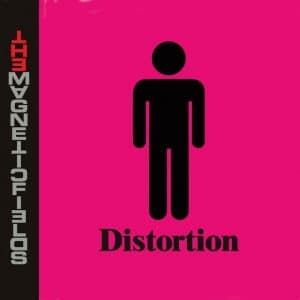 It’s four years since the last The Magnetic Fields album, i, but Stephin Merritt has hardly been idle. Yet where 69 Love Songs showed a remarkable profligacy of songwriting, and Showtunes elicited his love of Chinese music, Distortion is a conscious step back – not just looking over its shoulder, but swiveling round for a full-on examination of the past.

And the past, in this case, is dominated by one band – The Jesus And Mary Chain. If you loved the band’s 1980s blooming, then this record will be of huge interest as Merritt consciously pays homage to the era. Whether it can be regarded as a step forward for the The Magnetic Fields, however, is another issue entirely.

As ever Merritt provides consummate lyrical vignettes, most strikingly on Too Drunk To Dream, where he observes in the unaccompanied introduction that “sober life is a prison, shitfaced it is a blessing, sober nobody wants you, shitfaced they’re all undressing”. The song then steps out with a swaggering confidence, though look closer and it’s not difficult to spot its more vulnerable underbelly.

Distortion proves an appropriate name for the album, quite apart from its obvious representation in white noise, fully realised in Drive On, Driver, with its blatant guitar solo splitting the easy-spirited vocal in two before the orchestral touches shine through, seemingly from the other end of the room.

Merritt allows the full range of his voice to come through, not always successfully. You won’t hear a song more world weary than the diseased Old Fools, sounding like it had to be completed with the aid of a set of walking sticks. Likewise Mr Mistletoe explores the lower end of the baritone, and its macabre slow waltz and swirling distortion complement each other well.

And yet a dreamy psychedelica lends a more than pleasant air to Xavier Says, while Please Stop Dancing adds more than a touch of Human League deadpan. Zombie Boy, however, falls flat, its robopop lumbering at a leaden pace in an over-reverberant sound world.

Stephin Merritt’s aim with this album isn’t always clear. On many occasions it feels like an album he’s just discovered in the attic, gathering dust over the last twenty years. And yet while it can be viewed as a step backwards the qualities of his music still come toward the fore, both lyrically and melodically. Most of the songs have plenty to give in these spheres, so for fans this can be viewed as a qualified success, if never quite approaching previous highs.