The Magnetic North – Orkney Symphony Of

by Edward Clibbens
published: 7 May 2012 in Album Reviews
Tweet 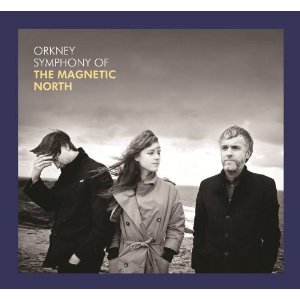 Having abandoned the folk-pop of Erland & The Carnival, Erland Cooper and Simon Tong have joined forces with singer-cum-orchestral arranger Hannah Peel to create Orkney Symphony Of The Magnetic North. The obvious question is, what exactly is ‘Orkney Symphony Of The Magnetic North’? Essentially it’s a love letter to Erland’s homeland, the Orkney Islands, the inspiration for which came to Erland in a dream; a dream in which an Orcadian girl Betty Corrigall, who killed herself in the 1770s while an outlaw, cast out for being impregnated by a sailor, told him to make such an album. Of course.

In keeping with the islands of its inspiration, this is a record of sweeping soundscapes and vivid imagery that conjures clear pictures of the isolated locations depicted in the lyrics and song names. Near enough every track is named after a place on, or a person connected to, the islands. Bay Of Skaill is akin to a nautical Arcade Fire, to the point that the string melody is almost identical to the end of Rebellion (Lies). That being said, it’s a fantastically minimal song of folk-story charm and otherworldly emotions.

With Peel as an orchestral arranger, the album drips with classical influences. Each track is rich with strings and woodwind, but all with an unavoidable folky edge. It’s a formula that works, and works to the extent that sets it aside in terms of originality. Radwick sounds exactly as a classical folk song might. The grand tendencies of classical string arrangements are reined in by the minimal folk leanings. Although it does lean somewhat towards being ‘pleasant’, it’s not MOR; it’s quite simply a really nice song.

The mood shifts on Old Man Of Hoy as it all becomes decidedly more menacing; the organ introduction wouldn’t sound out of place played over images of Dracula’s castle. It then transitions into quainter, soothing harmonies between Cooper and Peel before a brass arrangement of the organ intro leads out. This is probably the standout moment of the album. However, this isn’t an album of standout moments though per se; rather it’s a record to be enjoyed as a whole. The true worth of each track is found in listening to them in order start to finish.

The Magnetic North MP3s or CDs

The Magnetic North on Spotify