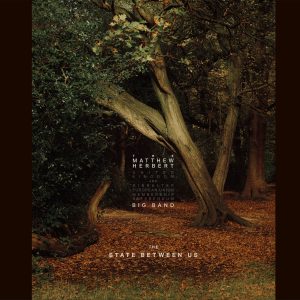 Matthew Herbert is a meticulous man. It’s a safe bet that every field recording he uses will be loaded with meaning, and that it will all be in aid of a concept that will be executed in a nuanced, interesting way. It is on this basis that a 2-hour-long album about Brexit – recorded and released within the Article 50 withdrawal period – seems like a decent idea, despite the whole vexed issue now mainly provoking apathy in this reviewer and, one suspects, much of the country.

The State Between Us is a slow record: as well as the tracks being long and based on repetitive motifs, there are also minutes at a time dedicated to the aforementioned field recordings. The opening track, A Devotion Upon Emergent Occasions, features birdsong, a distant choir that grows in volume until fully present, and a tree being cut down (it transpires that all sounds were recorded from within said tree). Such focus on atmosphere can make the album feel like the audio of a minimalist film, but they are mostly well-integrated with the album as a whole, and are sometimes more noteworthy than the band.

Lyrics are occasional, employed to greatest effect on the poignant You’re Welcome Here, mixing multiple levels of strife and solace over warm, muted instrumentation (“if you want it back just to how it was / if you just can’t move and you don’t feel right / if your hair’s not straight or your skin’s not white / you’re welcome here”). The sentiment is powerful, and in its scope the concept moves far beyond the trite gesture that it might have been in a lesser writer’s hands.

Another centrepiece of the album is Where’s Home?, in which Herbert reminds us that he’s also a great house producer. Samba-esque rhythms and uneasy, dissonant motifs interlock over a 4×4 beat, reflecting the catharsis of both Britain’s geopolitical situation and refugees searching for somewhere to live. These tracks have a value and an innate musicality that transcends their press releases, something that cannot be said for every track: The Special Relationship, for instance, is low on listenability with phrases untethered from meaning and a stop-start inconsistency that goes from mysterious to tedious very quickly. It’s also an example of the field recordings not adding to the song, aesthetically or conceptually – what does swimming across the English Channel, as heard in the final 2 minutes, have to do with a song about Britain and America’s diplomatic ties?

Moonlight Serenade fares much better, a cover of Glenn Miller’s 1939 classic that comments on WWII nostalgia as well as the amusing contradiction of nationalistic expatriates forming insular communities in European countries. The bawdy swing of Backstop (Newry To Strabane) is also immensely enjoyable, the simple opening motif building out into a chaotic, virtuosic album highlight. The band are on top form throughout, even if Herbert sometimes gives them overly stodgy material (see Fiesta, Be Still).

Lengthy, oddly paced, at times confusing and frustrating… but that’s enough about the Brexit negotiations. The State Between Us has some brilliant moments, but those moments are too stretched out: many of the tracks could have been half their length and been equally effective, and some could have been cut altogether for not holding together as pieces of music. However, even at its lowest ebbs it retains some intrigue from its novelty, and the sheer ambition of the album is not to be faulted. Fans of jazz, foley and crisis-stricken former empires could do worse than give this a try.