The Memory Band – Oh My Days 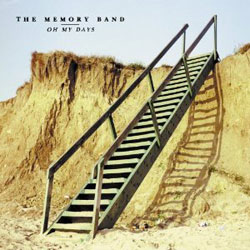 Folk types The Memory Band return for album number three with a new look line up. Change is in the air for Stephen Cracknell’s folk ensemble as an entirely new vocal set up and rhythm section are now in place, and with the likes of Dot Allison, Sarah Scutt and Quinta making appearances there are more guest performances than you can shake a suitably hay strewn pitchfork at.

Despite the undoubted quality of the players featured on Oh My Days, the overriding feel is one of disappointment. Everything is played beautifully, and there are times when the vocal harmonies are nothing short of wonderful (the rustic shuffle of Apples being a perfect example). But something is lacking. Perhaps the main problem is that the songs for the most part just aren’t particularly memorable. The vocals may well be sweetly presented, but there isn’t anything in the way of hooks to grab the attention. Ghosts might be an exception, possessing a surprisingly catchy vocal line and light summery percussion (in fact it’s reminiscent of Blind Melon‘s No Rain), which are juxtaposed nicely against a sorrowful string section. This clash of sadness and hope stretches as far as the lyrics (“There are ghosts in here, but I have no fear, because I know them all by name and they speak to me, I begin to see, deep inside we’re all the same”) creating a genuine emotive force.

Elsewhere there’s a distinct lack of impact. Opening with Crow, the album gets off to a gentle start, ambling around in a minimal haze, never really going anywhere. A New Skin follows swiftly and joins the dots between blues, bluegrass and classic spiritual. What should sound down and dirty comes across as far too clean, and although the lead vocal is suitably devilish, the accompanying music is not nearly rough enough to give the song the edge it deserves. Run River Run features the lyrics “put on your dancing shoes, we’ve got nothing to lose” set against a languid strum which for all the will in the world couldn’t possibly inspire dancing.

The tuneful ditty Apples inspires a little sunshine at the centre of the album with its hopeful tale of love. Indeed many of the songs on Oh My Days are tales of love and relationships – good and bad, hopeful and hopeless. The conversational demand for truth that constitutes Some Things You Just Can’t Hide is a perfect example of this, but although the directness of the lyrics is refreshing if heartbreaking, the lilting nature of the music that supports it does the song something of a disservice. It is not forceful enough to underpin a couple’s demand for honesty, although the military nature of the snare drum in the midsection is a nice touch, suggesting that relationships are at times, little more than war.

But ultimately Oh My Days is something of a let down. There are some nice touches, but there is nothing particularly memorable, which for a group called The Memory Band is pretty unforgivable. That said it might just be about context. It’s entirely possible that the likes of the dark natured swing of Demon Days could be capable of sneaking its way into the subconscious given a live airing in front of a cider fuelled crowd huddled in a barn at sunset as a long hot summer’s day draws to a close. It’s entirely possible that this album would sound amazing in a live setting. It just doesn’t at the moment.

The Memory Band MP3s or CDs

The Memory Band on Spotify