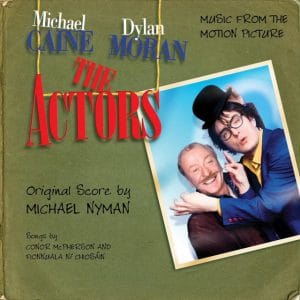 Coinciding with the release of the film of the same name starring Michael Caine, this soundtrack album to The Actors is dominated by The Michael Nyman Band – but finds space amongst its 19 tracks for some whimsical vocal work from a bunch of actors too. It’s a winning combination.

Fans of the Oscar-winning composer’s ouevre will find his trademark frenetic song structures mixed with an array of varied instrumentation to fine effect. It’s a melange of jazzy brushed cymbals, vibraphone, Hammond, mute trumpet and Nyman’s familiar strings and piano arrangements. Vocals are courtesy of film stars Dylan Moran and Lena Headey (who is about to pop up in Ripley’s Game too) – and a collection of children.

Headey and Moran’s song Could This Be Love, and two others by Cathy Davey, sound unmistakably Nyman in their core dynamics, despite the inevitable pop gloss that comes from slapping vocals over a contemporary classical musical notion. Of Davey’s songs, Lovely Morning is easily good enough to be a single, although a distinctly melancholic atmosphere pervades it. Seems So Long is less immediate, but is set well within the instrumental numbers of the album to present it in its best light.

While there are unmistakable classical influences at play, The Actors soundtrack sounds like Nyman’s most accessible soundtrack in years – possibly since his Ravenous effort with Damon Albarn. It benefits both from Una Ni Chiosain‘s Una’s Waltz – co-written with director Conor MacPherson – and its variations of mood.

True, 19 tracks sounds like a lot to sit through, but several tracks – including opener Act One – are mercifully short and give away just enough of themselves to be enjoyable over repeated listens.

Ultimately, whether you’re a Nyman fan or not, and whether you see or like the film, what has been produced here is a musically interesting release – and a worthwhile album in its own right. Nyman’s instrumental experimentation and the vocal numbers are of particular note, but overall there’s nothing here that outstays its welcome. The master still knows his stuff.