The Middle East – I Want That You Are Always Happy 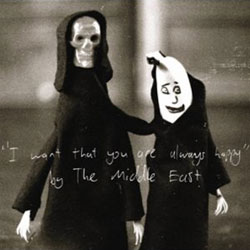 Just who on earth are The Middle East? Even after the 14 tracks (and more than an hour) of sophomore record I Want That You Are Always Happy, it’s very difficult to pin down the personality of the cult Australian band. Bouncing awkwardly between styles and tones, it leaves the listener frustrated by regular glimpses of brilliance but confused by the lack of a cohesive voice behind it.

Yet there is enough in what is a sprawling and, frankly, sometimes laborious record to suggest there is a real future for the group. Almost every song contains something unusual and slightly off-kilter, and as a collection of sketches and ideas this is a fascinating musical document. It’s also a record that grows on each listen – you’ll find that songs dismissed out of hand first time round have much more depth, while the most immediate ones are slighter than you expect.

The Townsville quintet’s debut EP, The Recordings Of The Middle East, featured breakout hit Blood, a thrillingly unusual piece of heart-breaking chamber pop that soundtracked adverts and a handful of American TV series. It encapsulated everything that was odd and exciting about the band – growing steadily from a slight, folky strum into a soaring wordless chant. While there is nothing quite as commercial as this on their new record, Hunger Song is probably as close as you’ll get, a driving, euphoric  pop song that feels much more straight-down-the-line than much here.

The record kicks off with two hushed, crushingly intimate folk songs that wouldn’t feel out of place on a Bon Iver record. Black Death 1349 feels as dark and uneasy as its title suggests – a medieval mood piece so accurate you’re surprised it isn’t plucked out on a lyre, which establishes immediately the group’s thematic preoccupation with religion. My Grandma Was Pearl Hall is a meditative, haunting lament that seems to come and go as it pleases, with lyrics about “dreaming in liquid” – an example of songwriter Jordan Ireland’s knack of turning in intricate, emotive lyrics that seem at once to mean everything and nothing.

Then the record takes one of its many diversions. Jesus Came To My Birthday suddenly drags the record out of its melancholic torpor with an utterly charming lo-fi grunge blast. It could all seem a little twee, but Bree Tranter’s deliberately naïve vocals contrast neatly with the Guided By Voices-esque jangle. A vein of pop sensibility continues with Land Of The Bloody Unknown, one of the record’s best moments, a woozy ballad that references ’70s country bands like Big Star and Gram Parsons, all echoing slide guitars and references to “Old Southern Crosses” and “minstrels singing”. Dan’s Silverleaf is the kind of good old-fashioned country stomper that Fleet Foxes would be proud to call their own.

But these moments are interspersed with slightly more awkward ones. Centrepiece Mount Morgan is a funereal, ponderous and reverb drenched squall that apes the kind of windswept, dusty desert rock that My Morning Jacket or The Besnard Lakes have made a speciality. It’s cumbersome, but a breath of fresh air compared to some of the forgettable acoustic strums that punctuate the record. Very Many quavers and trembles but never really threatens to provide anything more than a woodwind-drenched outro, while the eight-minute Deep Water is an endurance test, like an over-emotive Damien Rice track that overstays its welcome. Neither are bad per se, just underwhelming compared to the record’s more imaginative moments.

Veering between intimate, darkly-tinged folk and relatively twee chamber pop, this is a schizophrenic record that never really hangs together – the confusion perhaps heightened by its long running time. Like Arcade Fire‘s The Suburbs, it suffers from having too many ideas and a bit too much space to indulge them in. They may want that you are always happy, but, while there’s much for the listener to enjoy here, they will need to be more concise to achieve their obvious potential.

The Middle East MP3s or CDs

The Middle East on Spotify