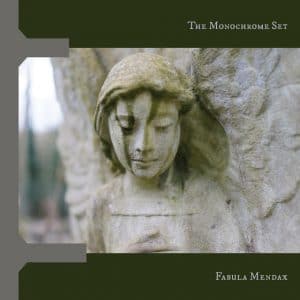 Fabula Mendax sees The Monochrome Set release their 15th studio album and fifth since reforming in 2010. Fabula Mendax could tentatively be described as a concept album. It is based on 15th century manuscripts written by Armande de Pagne (an associate of Joan of Arc) and tells the story of de Pagne as she flees her family and ends up caught smack bang in the middle of the 100 Years War, becoming part of Joan Of Arc’s devoted following.

The manuscripts are turned into lyrics which are placed alongside an almost folk based, melodic pop sound. The complexity of the lyrics and the brilliant stories that come with them results in an album that satisfies on two levels. Musically meanwhile, it is predominately a hook-laden, breezy pop album with hints of Belle and Sebastian and Jethro Tull.

Album opener Rest Unquiet Spirit fairly quickly finds a fast pace over a rapid acoustic rhythm guitar with a chorus that you find yourself instantly singing along to. Throw It Out The Window ends up evoking a similar ’60s pop buzz to that demonstrated on the debut The Last Shadow Puppets album, with singer Bid ending up at times sounding almost like Morrissey. The musical reference points continue through the album – at times you hear Al Stewart (My Little Relinquary), Love (Eux Tous) and on I Can’t Sleep there is even a slight echo of Gogol Bordello.

The lyrics try to evoke a feeling of period. This is evidenced by phrases such as “Grieve for the skin that flutters without as hand to hold, no strength to caress or to scold, but I preserved one fingerprint”, and the album’s final lyrics bring a real sense of close: “Bright is the morning, I’ll stay, the last flower in focus here in the day.”

Overall, Fabula Mendax is intelligent, and fun with it. The storytelling holds attention throughout its comparatively brief 34 minutes. Variation in the music keeps things interesting, evoking a similar experience to Hazards Of Love by The Decemberists. It’s an album that stands up on its own and remains, musically at least, a positive, upbeat and highly enjoyable work.

The Monochrome Set MP3s or CDs

The Monochrome Set on Spotify