The Moons – Fables Of History 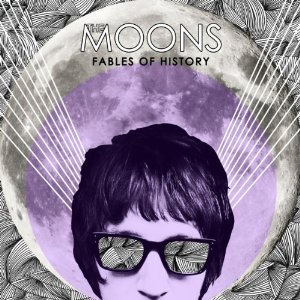 Sounds of the ’60s and ’70s never seem to fade despite pundits quickly writing off many a band’s failed attempts to emulate said era. Last year saw Toy Horses pull it off and this year it looks like The Moons could do just that. Despite their first album, Life On Earth, sliding under the radar somewhat more than it deserved, Andy Croft’s band returns with their second ’60s possessed studio LP Fables Of History produced by Stan Kybert, whose previous work with Oasis is apparent on a number of tracks.

Having already been previewed as Bradley Wiggins’ personal soundtrack to his Tour de France victory and road tested supporting Beady Eye, the listener can expect a more than refined recording. The Moons evoke ’60s psychedelia as soon as the opening track fires up and they’re proud of it. Andy asserted “We look to our icons to craft the perfect story.” The album is a tough monkey to identify as it dabbles its toes in both the vintage and contemporary, but if you mix equal portions of The Arctic Monkeys, The Kinks, Kaiser Chiefs, The Beatles and Paul Weller then you’re not far off the mark. This may sound as though they’ve overdone it with the earmarking but they pulled off each track, making each and every one their own.

First single Double Vision Love is a potent, archetypal mod song sounding like Kaiser Chiefs and The Addams Family mixed in a blender. Possibly not the nicest sounding amalgamation but it actually provides for an unusual yet thoroughly enjoyable mix of driving beats and dreamy pop harking back to Status Quo‘s early beginnings. The album as a whole has a vintage sheen to it. This is particularly the case on the acoustic folk number English Summer with impervious guitar harmonies intertwined with classic Hammond organ melodies.

The album gets very Beatles/Rolling Stones sounding on possibly the strongest track Something Soon featuring Paul Weller on vocal duty whilst recent dreamy single Jennifer (Sits Alone) is about as psychedelic as they come replete with resonant, cavernous percussion and tooth rotting sweet flute trills. It was also more than reminiscent of David Bowie‘s Major Tom days. Further hat tipping can be found on the album, particularly to The Kinks and The Beatles, and in The Moons’ case this is a very good thing, particularly with It’s Taking Over, fuelled with a jaunty bass line and thumping drums, replete with bongo filler.

The only real demur was the final track that doesn’t really do justice to the album. It starts off with a gorgeous, almost movie soundtrack, string section but the once the song begins proper it fails to make much of an impact. The chorus could be a grower but the verses are bland compared to much superior previous tracks. It’s a shame they didn’t end on Lights Out, which is a great title for a final track too.

Having said that, 99% of the tracks on Fables Of History are passionate and earnest, dealing with typical modern day British life with a vintage soundtrack. Everything about the album as a whole shines – tight playing, excellent production values, the harmonies, the arrangements and the vocals. The two singles are definitely standout tracks but the whole album is a great throwback to the ’60s and ’70s and will appeal to both today’s and yesterday’s generations as The Moons seamlessly shift between each style to create an almost flawless record.

The Moons MP3s or CDs

The Moons on Spotify