The Mountain Goats – Dark in Here 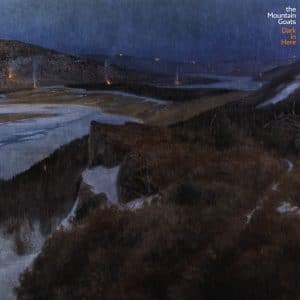 The Mountain Goats are a phenomenon, an institution, a singularly powerful entity hell-bent on producing at least one great indie rock record every couple of years (this is their eighth in the last decade, and 22nd in total). They’re like Guided by Voices for people who prefer tweed to denim, and you’ll find strands of their influence in acts as disparate as Sufjan Stevens and Arab Strap.

Last year, John Darnielle and his co-conspirators released the rather superb Getting Into Knives, which was remarkable in that it featured a relatively stripped-down sonic palette, and a focus on making music that was destined to stay part of the live setup for years to come. Simply put, these were songs that were designed to be people-pleasers.

Dark In Here, as you might have figured out, is a companion piece to …Knives, especially as it follows the same kind of trajectory of its brother album, and doubles down on the kind of loose, woolly, soul-stained musical backdrop of the earlier album. What it does do, though, is opt for a more reserved, restrained mood and a more contemplative tone, offering the listener a more subdued atmosphere in which to wallow.

The first track, Parisian Enclave, and especially the title track, hint at the kind of simplistic, visceral thrills that you’d find on earlier Mountain Goats albums. Where the band play with dynamics, on Lizard Suit and the wonderfully-titled The Slow Parts On Death Metal Albums, the band hint at a lively, almost (say it quietly) funky flavour that stops the album from becoming too soporific.

Dark In Here is, for all intents and purposes, just more of the same from Darnielle and co. There’s no real break from the norm to speak of, no real attempt to break new ground – but then why would there be? They haven’t made it this far, and been this well-loved for this long, by messing with the formula that often. In fact, like many of their peers and contemporaries from Bill Callahan to Superchunk, the thrill with a new Mountain Goats record is just how similar it’ll be to your favourite thing they’ve done in the past. And this is, well, pretty close to your favourite (whatever that may be…).