The Mountain Goats – In League With Dragons 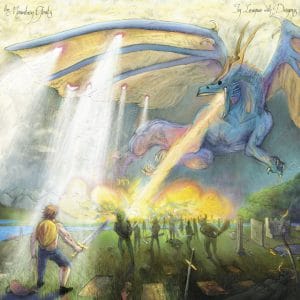 “Don’t call it a comeback, I’ve been here for years” runs one line on In League With Dragons, the 17th album from The Mountain Goats. Sadly, it’s not the case that John Darnielle has decided to record an LL Cool J cover versions album, and this is not The Mountain Goats take on Mama Said Knock You Out you didn’t realise you needed.

Instead, In League With Dragons is a typically varied collection of sad, funny and kooky tales from one of the most prolific songwriters of his generation. You’d be forgiven for thinking this is some kind of Dungeons & Dragons record, or going by the cover, an unexpected soundtrack to Game Of Thrones. Yet unlike his previous two albums – Goths and Beat The Champ – this isn’t a concept album per se, but rather a selection of songs about fallen heroes: be they famous old baseball stars gone to seed, a possum, and even Ozzy Osbourne.

There’s been a sonic overhaul too, with Owen Pallett taking over production duties from the band’s regular producer Brandon Eggleston. Darnielle has also embraced the sound of a full band, bathing most of these songs in a jangly, mid-period R.E.M. sound. There are moments where they’re reminiscent of Prefab Sprout, while at others they go full-on country stomp. It’s one of those rare albums where you genuinely can’t guess what’s coming next.

For example, opening track Done Bleeding is a heartfelt, personal account of battling addiction and leaving demons behind (“Leave a mark on the door, as an empty warning sign from one who’s gone before, but isn’t here anymore), while the following Younger is nearly six minutes long, is built upon a jerky acoustic guitar riff and concludes an unexpected saxophone solo.

Elsewhere, Possum By Night is a beautifully orchestrated piano ballad which, given that it’s written from the point of view of an ageing possum looking back on his life, is oddly moving. On the other end of the scale, Waylon Jennings Live! is a hilarious account of a drug dealer who finds himself “drunk at the Meskwaki casino, right where God intended to me”, watching the titular country star, “the one man in this room who’s handled more cocaine than me”.

Pallett’s widescreen sound means that, sometimes, Darnielle’s music sounds even more subversive than usual. Cadavar Sniffing Dog is upbeat, even jaunty, but one listen to the lyrics indicates something a bit more bleak – it’s basically a description of a crime scene, in which the lead investigator ends up calling for the said canine, while Passiac 1975 is a rather sad tale, told from the perspective of Ozzy Osbourne. While it may have been his commercial peak, Darnielle sees a man coughing up blood while he renews “the assault on my lungs and my liver”.

While The Mountain Goats will always remain an acquired taste, there’s a case to put that In League With Dragons is possibly one of their most accessible albums. The collaboration with Pallett is a smart one for sure, and Darnielle has refused to let age dull his edge or mischievous eye for lyrical detail. Maybe, just maybe, that LL Cool J covers project is next on the list.