The Mountain Goats – The Life Of The World To Come 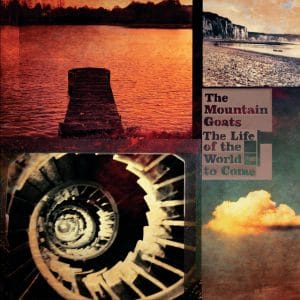 Each of the 12 tracks on The Mountain Goats‘ latest, The Life Of The World To Come, takes its title from a book, chapter and verse of the bible that either inspired or informed their genesis. John Darnielle dismisses any questions about a spiritual awakening, saying “It’s not like that. It’s not some heavy-narrative-distance deal either, though, and it’s not a screed. It’s 12 songs the Bible taught me, kind of.” And so starts the lesson. And the very long titles.

Opener 1 Samuel, 15:23 “For rebellion is as the sin of witchcraft, and stubbornness is as iniquity and idolatry. Because thou hast rejected the word of the LORD, he hath also rejected thee from being king” is a simmering confession from a crystal healer and quack, with a clear link between verse and song.

The arrangements soon prove to be no great departure from earlier Mountain Goats’ releases. Their sound is instantly recognisable; scratchy yet effective acoustic guitars and tender nasal vocals from Darnielle, backed sympathetically and ably by Pete Hughes and John Wurster’s rhythm section. The one new embellishment comes from string arrangements by Owen Pallett (aka Final Fantasy). On Hebrews 11: 14 (For they that say such things declare plainly that they seek a country), these turn what otherwise might be an unremarkable melody into a sweetly emotive composition.

Less upbeat than 2008’s Heretic Pride, the tone is very much a reversion to that aired on Get Lonely, their maudlin dissection of a break-up. Although the biblical themes cast a wider net for subject matter, the tone, from depressed resignation to anger, is so familiar that one sometimes has to remind one’s self that this is a new album.

Where Darnielle and his colleagues do provide a little light, the result is often cheesy. Genesis 3:23 “So the LORD God banished him from the Garden of Eden to work the ground from which he had been taken”, recounts a visit to a childhood home. “I used to live here… pictures of no-one I know… hours we spent starving within these walls”, might not recall a childhood in paradise, but the sentiment is cloying nonetheless. And what is he doing creeping around someone else’s house anyway? Do they know he is there?

So familiar in sound and emotion, the album sometimes seems more about the gimmick of the song titles, and what they reveal, than about musical or lyrical innovation. And where Darnielle has managed to tread a line between classic songwriting and schmaltz before, he is less successful now. Romans 10:9 “That if thou shalt confess with thy mouth the Lord Jesus, and shalt believe in thine heart that God hath raised him from the dead, thou shalt be saved.” could, but for the superior instrumentation of the rhythm section, be a Christian rock number.

Darnielle shows that he can cut the mustard on his own on Matthew 25:21 “His lord said unto him, Well done, thou good and faithful servant: thou hast been faithful over a few things, I will make thee ruler over many things: enter thou into the joy of thy lord.”, a hugely touching description of a final visit to a dying friend. Every detail is so vividly sketched, only the steeliest listener would not be affected.

But for the main part, The Life Of The World To Come is so familiar as The Mountain Goats that it seems rather lazy. At its worst it is MOR Christian rock saved by the contributions of Wurster, Hughes and Pallett. Perhaps this listener was so absorbed looking up the bible citations that he missed the point, but then perhaps Darnielle was hoping that the enigmatic titles would distract the casual listener from a casual record.