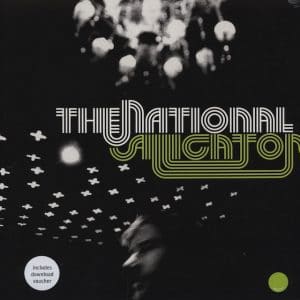 Alligator is the third album from this New York via Cincinnati based band. Where most bands struggle to contain one set of brothers without conflict, The National have two sets: Bryce and Aaron Dessner together with Scott and Bryan Devendorf. The National’s line up is completed by vocalist/lyricist Matt Berninger.

This is the sound of a man turning himself inside out, letting the listener experience the visceral thrill of emotions on display. It’s Leonard Cohen fronting Joy Division, or Tindersticks arm wrestling with the Velvet Underground. This is soul music as dispensed by a rock band, country and urban.

The vocals are deadpan, fatigued and ghostly, and the music windscreen, at times ruby red and lush, by others mahogany black and shrouded in austerity.

The lyrics are not printed in the CD booklet, which is something I love as it makes you listen harder, leaving the songs more open to personal interpretation. Berninger’s lyrics dissect his state of mind with an economy and sense of poetry that is all too rare. They trace fault lines in his psyche, from the machismo swagger of All The Wine and Mr November, through the dark Freudian longing of Karen, to the doubtful, reflective and rueful Daughters of The Soho Riots and the apology of Baby We’ll Be Fine.

Alligator opens in the light, the sound of a fresh summer morning. Strummed acoustic guitars, vibes and Beringer singing “I know you put in the hours to keep me in sunglasses I know”. Then the lyrics spin into a darker realm: “I am sorry I missed you, I had a secret meeting in the basement of my brain, it went the dull and wicked ordinary way.” Full of paranoia and self-laceration, which are two themes that occupy much of the record.

Musically it’s a rich, complex mesh of guitars, strings, piano and woodwind. On each listen I seem to hear something new, whether it be a faint cello, a new guitar figure, or the rattle of exotic percussion.

On Friends of Mine, the guitar line nags like a toothache, crawling into your mind. “Why did you listen to that man…” with the drums providing the perfect punctuation mark. Karen is a dark mixture of piano and dusty strings, while flinty slashed chords and manic drumming propel the harsh textures of Lit Up.

Brushed drums, echoes of guitars and a beautifully doomed set of piano notes carry the stately homage to the perils of escape that is Daughters Of The Soho Riots. “Break my arms around the one I love” Berninger’s voice becoming a sigh, then a mumble. The vocal carries more emotion in its limited range than 1000 Pop Idol pitch perfect Britney wannabes.

The need for some distraction, a night out spending cash to escape haunting memories flashes through City Middle. It’s a final lunge for love amongst misplaced desires. The wordless vocal harmonies that appear halfway through the track are beautifully placed, and the resigned sense of melancholy is overwhelming and perfectly judged.

The closing Mr November, paints a picture of man desperate to close a deal. Is it a love affair, a wedding, or a business transaction? The impressionist lyrics only offer shrouded clues. The protagonist’s nerves seems to be crumbling, and the song becomes a desperate plea and attempt to will himself across the finish line by remembering past glories: “I used to be carried in the arms of cheerleaders…I am the great white hope”. You can picture Berringer mouthing the words to himself in the mirror of the men’s room before he strides out to meet his fate.

This is a beautifully realised, artful, twisted, thought provoking record. The bookish, intricate lyrics revel more each time you listen. The music twists, shatters, reforms and glides with grace and elan. Amazing.