by Danuta Kean
published: 21 May 2007 in Album Reviews
Tweet 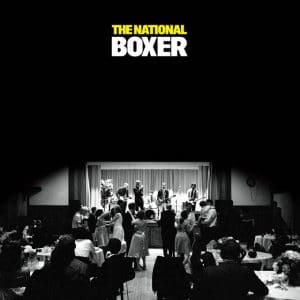 A while ago I wrote a review of The National at the 100 Club, and confessed that their last song of the night left me in tears. It was the climax of an emotionally draining set. By the time I listened to Gospel, the final track on the band’s new album Boxer, I found the salt pricking my eyes again.

Subtle and wistful, Gospel features a classic Matt Berninger vocal, at once intimate and longing, which contrasts softly with a piano and guitar melody that echoes the plaintive toll of a distant church bell. It is a far cry from the raw anger that has characterised much of the Brooklyn-base quintet’s previous work, especially their breakthrough 2005 album Alligator.

That the band has finally arrived in Americana’s mainstream is evidenced from a roll call of Stateside coolsters who lend a hand on Boxer – from Regina Spektor and Ryan Adams to Sufjan Stevens and Australian composer Padma Newsome.

A starry roll call can be a warning that style has defeated substance as a band tries to resuscitate what made them work “before they were famous”. For The National, who had struggled to be heard with three previous albums, topping Alligator was daunting and the pressure to deliver more of the same was, by their own admission (in our interview), at least initially, creatively crippling, hence the two year wait.

Fans expecting Alligator Mark 2 will be disappointed. Boxer lacks the harsh edges and violent imperative that powered much of Berninger’s lyrics and delivery, as well as brothers Bryce and Aaron Dessner’s and Scott and Bryan Devendorf’s music. That does not mean, however, it is a bad album. Far from it, put simply Boxer is superb. A classic that grows like ivy on every play.

Kicking off with Fake Empire, in which Berninger’s melancholy baritone reflects on a somnambulant middle America, “half awake in a fake empire”, it signals an album that throughout is more observational than enraged.

The song’s sinister build-up, thanks to Bryan Dessinger’s characteristic drumming and an almost neurotic piano melody, is discomforting – a musical theme reflected elsewhere, including in Guest Room and Apartment, where Devendorf uses polyrhythms to add texture. In Start A War this subtle dissonance underlines Berninger’s disturbing vocal, which renders sinister despairing lyrics.

Those looking for a return to the aggressive polemic of past albums will find most comfort in Mistaken For Strangers, although the reiterated chorus of “showered and blue-blazing, fill yourself with quarters” is more of a comment on the alienation of fame, the musician turned into marionette, a human jukebox there to perform, an object joié. It is a rare angry moment on what is – despite Devendorf’s rapid fire drumming – a deeply reflective, almost hypnotic set of songs.

Alienation is the over-riding theme of an album that consistently asserts the personal over the political. Perhaps this is a sign of too long on the road and feeling disconnected from the folks back home. It is a theme echoed in tracks such as Green Gloves (a sad, song for lonely lovers if there ever was one) and Start A War, which features one of Berninger’s best lines in a long list of esoteric lyrical wisdom (“you were always weird but I never had to hold you by the edges like I do now”).

A joy of Boxer is Bryce Dessner’s Spanish guitar, showcased gloriously on among others Racing Like A Pro and Ada. We’ve heard it before of course on the luminous Daughters of the Soho Riots and creepy Cherry Tree, but on Boxer his considerable gifts as a guitarist are no longer hidden behind the louder splashier talents of his band mates.

Racing Like A Pro is, along with Gospel, a Sufjan Stevens-influenced tracks. For once the drumming is ditched to reveal a ballad that could, in the hands of the likes of Rufus Wainwright, be turned into a classic torch song. Berninger’s baritone sounds comforting and humorously nostalgic.

Dessner’s guitar provides the backbone to Ada, my current favourite – though with songs as good as this that keeps changing. A euphoric love story, the piano provides a counter melody that adds an almost painful wistfulness to a song that, thanks to a major chord break that washes over the melody like a fresh wave, brings to mind lost summer days and long-forgotten love affairs.

Berninger’s craftsmanship as a lyricist, his ability to reflect the commonplace and profound are for once playfully displayed, before the band moves into the hypnotic Gospel, and I find myself tearful. The National were worried that they wouldn’t be able to follow up Alligator, that fans would be disappointed. Boxer proves their fears ungrounded – and that Alligator was no one classic wonder.