by Rob Watson
published: 10 May 2010 in Album Reviews
Tweet 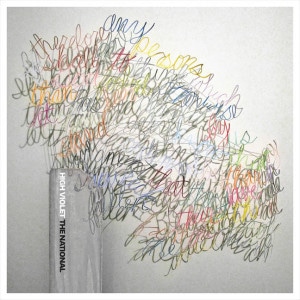 The question of which of Brooklyn rockers The National‘s last two records, Boxer and Alligator, is better will quickly reduce the forums of muso websites to histrionic levels of squabbling. Nations have risen and fallen in the time it has taken for it to become clear – there is no real answer.

Both, in their own ways, are landmark entries into the Great American Songbook. Such is the critical acclaim, and immense dedication of the band’s fans, that Mat Berninger’s literate songs about love, insecurity and perversion are often cited amongst the best in the world. The band have both the ability to switch from sweeping rock bluster to intimate beauty in seconds, and the enviable alchemy of a studio stacked with prodigiously talented musicians.

So it’s understandable that fans may approach High Violet, the band’s fifth full-length album (with two EPs thrown in for good measure) cautiously. Of course, any new material by the band is to be treasured, yet how do you strive to improve upon such well-loved work?

The answer, surprisingly, is that High Violet doesn’t even try. A little like R.E.M., who followed up the introspective Automatic For The People with balls-out rocker Monster, High Violet is a much more expansive rock record than Boxer. Almost every track is given a triumphant, echoing and sometimes overpowering sheen – perceptibly referencing Arcade Fire. It’s not to say there aren’t quiet moments on the album, but even those have a very potent urgency about them. High Violet, in all senses, is a driven piece of work.

Yet, this is no bad thing. This is the sound of a band working with supreme confidence in who they are and what they can achieve. While many will miss some of the subtleties and idiosyncrasies of their previous work, High Violet tears along, carrying you along in its slipstream, a thrilling and revitalising piece of work that is louder, scuzzier and more immediate than anything they’ve done before.

Take lead single Bloodbuzz Ohio, for example. Kicking off with a roaring of trumpets and a ringing piano line, this is The National doing No Cars Go or Rebellion (Lies). It makes for an incredible album centrepiece, with Berninger’s oblique lyrics creating moodscapes that, while difficult to pin down into specifics, seem to mean everything and nothing at once. As he sings “I was carried to Ohio in a swarm of bees/I was never married, but Ohio didn’t remember me” in his now-infamous baritone drawl, you get a sense of displacement and longing that is far more effective than any more on-the-nose description.

If all of the band’s records had a loose thematic core running through to them (Alligator’s deconstruction of youthful hopefulness, Boxer’s more downbeat fear of an unsure future), High Violet is the band’s most grown up record – mirroring the now late-30something group’s outlook on life. Berninger returns again and again to the uneasy feeling of domestic insecurity – on Afraid Of Everyone he talks of “With my kid on my shoulders/ I try not to hurt anyone I love”, while on the Sylvia Plath-like Conversation 16 he tells his lover “I found what we’re missing/ I tell you miserable things after you’re asleep”.

Two of the record’s most effective tracks are also the quietest. Runaway and Vanderlyle Crybaby Geeks – which both build to shattering, spine-tingling crescendos. The latter is a departure for the band – the song revolves around a cyclical, almost nursery-rhyme melody which shows that the band are more than capable of turning in a lighters-in-the-air, this-is-our-song if they need to. Runaway is more subtle, never breaking out into full explosion you expect, but with a glorious trumpet fanfare evocating lyrics about being “Left to the flood”.

Some tracks will take more time to assimilate into the canon. Lemonworld feels less considered than anything around it – more poppy and U2-like than anything here with a simple “Duh duh duh duh” chorus. Anyone’s Ghost is like its title – formless and intangible. However, both make more and more sense with repeated listens. The National have pulled off a neat trick here – an immediate, commercial album that grows with each listen. While High Violet is patently as good as its antecedents, it is also very much its own beast.