The National – Trouble Will Find Me

by Andrew Burgess
published: 16 May 2013 in Album Reviews
Tweet 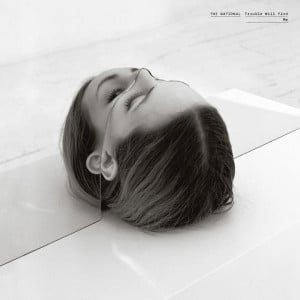 Matt Berninger is a man who wrestles with his demons and soaks his tales of defeat, loss, and inadequacy in a sea of wine. On past efforts by The National – most notably 2005’s Alligator – Berninger’s pocket poems have been carried on spindly, spiny legs of brash noise and swirling orchestration prodded along by the simple machine-gun accuracy of Bryan Deffendorf’s drumming. In the past, he’s allowed himself to come unhinged. On Trouble Will Find me, though, The National construct cagey, nervous, buttoned-up songs that feel one shutter shy of shaking loose from their moorings.

The threat is ever present, and the fact that it never quite comes to fruition makes Trouble Will Find Me a haunting, emotionally dense album that never quite finds catharsis amid all its handwringing. On Don’t Swallow The Cap, Berninger laments: “I have only two emotions / careful fear and dead devotion.” These two emotions are prominently on display throughout the album as the listener follows the confessional trail of a man stripping off his suit and tie and stumbling down the beach only to collapse into the sand before the tide can carry him out to sea.

The foreboding melancholy of Bryce and Aaron Dessner’s atmospheric guitars creates a tension with the beauty and simplicity of the arrangements on many of the album’s tracks. Berninger alternates between his trademark hangdog baritone and a new higher register melodic approach; he’s traded in the pugilist’s pacing of Alligator and Boxer, allowing instead for the sadness, longing, and anger in his lyrics comes through with all the medicated precision of a morphine drip. On the album’s punchier songs – the pounding, driving Sea Of Love and the chugging, oil-slick Graceless – he comes across as a man who lives underwater, looking up at the wavering surface of the world outside with the agoraphobe’s consternation.

The album opens with the slow-burning I Should Live In Salt, which finds Berninger going through a litany of miscommunication with the refrain “You should know me better than that”. Demons has a frantic, manic quality to it but Berninger’s rumbling baritone keeps things appropriately morose as he recounts the mysteries of “alligators in the sewers” and “the worried talk to God”. Heavenfaced has a wintry precision to it, built on piano and plucked guitar.

On Slipped, Berninger traces the path of a broken relationship, promising that this time, “I will not spill my guts out,” and that “I won’t need any help to be lonely when you leave me”. Pink Rabbits hangs on a simple piano line as Berninger waltzes through tales of falling apart from the metaphorical point of view of a “white girl in a crowd of white girls in the park” and “a television version of a person with a broken heart”. And the album’s closer, Hard To Find, brings everything to a close with an invocation and a lyric re-appropriated from the Violent Femmes. The dismissive refrain – “They can all just kiss off into the air” – takes on a dejected, defeated quality that leaves the album spinning and unfinished, waiting for another listen.

Trouble Will Find Me is a collection of waves that never break. And following in the footsteps 2009’s High Violet, it finds The National shouldering the weight of the world and nearly collapsing beneath it, but doing so with unmatched grace and a steady hand. While catharsis never comes, there are glimpses of light coming through at the edges, and a sense of perfect order among the chaos.