The November Five – If You’re Satisfied You Are Dead 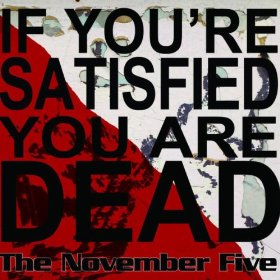 In interviews, The November Five certainly talk a good fight, they’re quick witted, and smart. When they’re in full flow, it’s a little bit like reading the kind of impassioned interviews that used to appear in Melody Maker, Sounds, and NME back in the late ’80s when bands actually seemed to care about what they were doing. This is perhaps not particularly surprising after all, The November Five are quite a bit older than the majority of new bands these days, and it seems likely that the band probably have a fair few slowly yellowing Steven Wells and Tony Parsons articles knocking about in the cupboards somewhere. They know a good soundbite too, claiming that they’re like a clash of ASBO and MENSA, an assertion that isn’t too far from the truth. Clever lyrics and simplistic, direct riffing make for a potent mix that hits the target repeatedly. Of course soundbites are not much good unless you have the musical chops to back it all up, and The November Five has those in spades.

There are any number of influences that make their presence felt on If You’re Satisfied, but for the most part The November Five lean heavily on the early punk chaos of The Stooges, the clever guitar work of New Wave bands like Television and ever so occasionally there’s the odd hint of Joy Division added for flavour. With the band clearly well versed in contemporary musical history, it’s unsurprising that they’ve looked to the past for inspiration. What’s important however is that they’re not so in thrall to the bands that inspire them that they seek to merely ape them, and instead head off in their own direction.

Here We Come opens the album in a fairly muted manner with just a squall of feedback floating over a straight up backbeat and bassline. Vocalist Joe Cribben sounds not unlike Edwyn Collins, as he fires out lyrics about being crushed by some unnamed woman. The song quickly opens up into an adrenaline fuelled rush, and the band appear to have taken their guidance from Sniffin’ Glue in terms of riffs as they batter off a powerful three or four chord hook.

Helicopter follows in similar fashion, with Stooges aggression mingling with New York New Wave to provide a full on assault with a vital pop-sensibility. I Demand changes tack a little as it drowns the obvious pop tones and bathes in waves of fuzzed up guitar. Picking Up The Pieces finds the band stretching themselves a little more and heading into slick rock territory (think Sonic Temple era The Cult), primarily it’s still fairly basic stuff until they hit the mid-section when everything degenerates into a creeping Gothic swamp. From here they head to Good To Be Alive which might well be a cover of a long lost Baby Bird song, with the main vocal apparently torn straight from Stephen Jones’ larynx. Breathe mixes Sex Pistols riffing with Joy Division aesthetics, the melancholy of one influence somehow elevated by the sheer exuberance of the other.

Good Cop Bad Cop features a button downed riff and a fantastic muscular bassline to compliment a lyric about police brutality. It might not be complex, but it doesn’t need to be as it swaggers through the verses like a street walking cheetah with a heart full of napalm. Closing the album is Reach Out which is at odds with almost everything else on the album A delicate, slinky affair, Cribben gets a touch of the Jim Morrison blues as he goes walking through the flames as the band keep things smouldering on the down low.

The November Fire might not be doing anything particularly new or groundbreaking, but they’ve produced an album that basks in the heady excitement of rock and roll and being a bit of a smart arse, which is about as good as it gets. Certainly it is not perfect, but then if we were totally satisfied, we’d be dead, and last time we checked, we had a pulse.

The November Five MP3s or CDs

The November Five on Spotify