The Orb – Abolition Of The Royal Familia 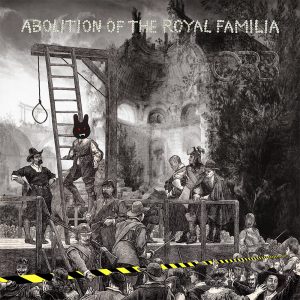 Alex Paterson and his merry band are back with a new record, this time with a vaguely colonial theme. The album is ostensibly about the British royal family’s involvement in the opium trade, although this is not something one would pick up on by actually listening to it.

The whole sonic approach on Abolition Of The Royal Familia is at once a lot more coherent than The Orb’s previous record, the transitions between different genres and moods more methodical and well-paced.

The album opens with Daze (Missing & Messed Up Mix), which is reminiscent of DJ Koze with its laidback disco groove, before picking up the pace and heading for house territory. Hawk Kings (Oseberg Buddhas Buttonhole) is the best track in this first section: dramatic strings trilling on top of an incessant bassline, a snaking melody lurking underneath and the titular Stephen Hawking quotes bookending the song.

As the record moves from this to reggae, then to drum ‘n’ bass – the dreamy vibe of The Queen Of Hearts (Princess Of Clubs Mix) is a particular highlight – then back to ambient for its final two tracks, the sound design remains inventive and the journey, while long at 78 minutes, is enthralling and a lot of fun.

Slave Till U Die No Matter What U Buy (L’anse Aux Meadows Mix) brings the record to a close, and while the soundscape is blissful enough with its vapour trail chords, the spoken word sample hits harder than was perhaps intended: “stay in your homes… no more than two people may gather anywhere without permission”.

The Orb MP3s or CDs

The Orb on Spotify