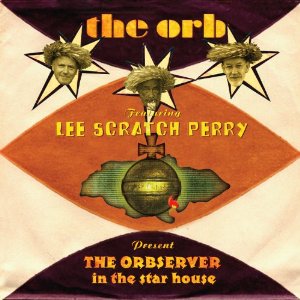 When a trick works once, why not do it again? The Orb teamed up with David Gilmour in 2010 to bring his brand of spaciness together with their ambient noise. It was the most vital release under The Orb banner in years. No surprises then that Alex Paterson and Thomas Fehlmann turned to Lee “Scratch” Perry, another character untroubled by unearthly concerns.

Heralded by horns on the opening track, Ball of Fire, Perry comes off like a confused Old Testament prophet thrust into the modern world, high on the fumes that gave John the Book of Revelation’s nightmarish visions. There is wisdom in Perry’s words but it comes floating out from within a sea of nonsense and almost-childlike wonder with words including an odd little play on Will.i.am’s nom-de-pop (“I am Will and I am I, I am).

Dub provides the foundation for the 11 tracks on The Orbserver… but while The Orb were clearly tapping into the ghosts of Perry’s self-immolated Black Ark legacy, the synths, pads and piano pull influences from funk, hip-hop and house. It’s a rich gumbo of the musical styles explored on both sides of the collaboration, an enlivening trip through their memories.

The past work of both The Orb and Perry is revived in intriguing ways. A reworking of Police & Thieves, which Perry co-wrote and produced with Junior Murvin, is warped and wandering, so relaxed it’s practically horizontal. The vocals are almost lullaby-like and smartly tied to the past with a loop from a ‘60s Upsetters organ track.

Golden Clouds is a retelling of The Orb’s Fluffy Clouds with Perry responding to the question “so…what were the skies like when you were young” far more directly than Ricky Lee Jones did on the original. For Perry, the answer is less metaphorical than meteorological: “We had white clouds. Sometimes we had golden clouds. Blue space. White clouds…sometimes we got rain. Sometimes we got rain-bow.” Acoustic guitar and strings back his forecasting with electronic bleeps bursting through the peace.

For all the looking back, Perry burbling about the punks and funk and The Orb revisiting past samples and tricks, there is something fresh in this record. Rather than trying to fit the dub legend into an ambient cage, The Orb’s backing gives him space to breathe and put Paterson’s abiding love of dub to good use. That all the members of this holy trinity also have a liking for the herb can’t have hurt matters either. The Orb and Lee “Scratch” Perry recording in Berlin could have been a disaster but this is anything but.