The Pains Of Being Pure At Heart – Belong 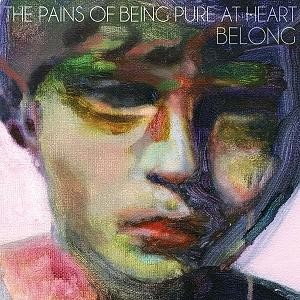 Kip Berman, lead singer and guitarist of The Pains Of Being Pure At Heart, once described his band’s sound as “loud and wimpy”. This was during the press cycle for their self-titled debut LP and, while the description still rings true with their sophomore effort Belong, they’ve developed every aspect: guitar tones, song structures, vocal melodies.

They were set up for polished greatness. Mega-producer Flood worked with them throughout the recording process and Alan Moulder mixed it. Names like that will attract quite a bit of attention. Along with two epic singles to lead the hype (Heart In Your Heartbreak and Belong), a music video and a Letterman performance, they’re almost guaranteed to break some new barriers.

Yet when the hype passes, this record will stand the test of time. Berman’s thin and whispery vocal delivery on top of pumped-out layers of guitars and keys creates a perfect formula for sugary, honey-coated pop. The band is known for being quite the record-heads, wearing their selective influences on their sleeves. With a creamy fuzz that makes its way onto almost every song, its hard not to think of The Smashing Pumpkins‘ masterpiece, Siamese Dream. Opening with their title track, it only takes a good 12 seconds of drums and light-picking guitar for that deep, Corgan-esque guitar to come in. Then it really picks up. “I know it is wrong but we just don’t belong,” says Berman in his whisper-shout chorus. The chorus, along with a charming bridge about hospitals and shopping malls, jumps listeners right into some of their best work. In fact, the first three tracks are arguably their strongest cuts, save the epic-ender Strange.

Immediacy was everything on their first record. Belong is, of course, a pop record, but there aren’t as many one-off hooks that sculpted their debut. Almost of the songs have more developed melodies. Heaven’s Gonna Happen Now might be the exception, which sounds like it could have fit perfectly on their first record, yet, oddly enough, is one of the best on Belong. Once in the heart of the album, there’s a string of songs that are slower moving, growers. The Body, a sweet yet surprisingly sexy song – “Tell me again what the body’s for” – churns away with soaring synths and a verse melody that uniquely twirls up and down Berman’s range. Anne With An E, the next song, starts at an even slower tempo with a sparse melody, soft instrumentals but has some of the best cutesy lyrics for teenagers to dive into: “Lets go out tonight and do something that’s wrong/ ‘Cause I don’t feel alright when disaster’s gone”. Ending the string of reservation comes the anthemic Even in Dreams. The U2-like chorus is a great surprise, and hits like a brick.

Album closer Strange seems to accumulate all of the high points of the album. There’s the slow-burning sentiment of the middle section, the loveable lyrics (“When everyone was doing drugs, we were just doing love”) that made songs like Heart In Your Heartbreak (“She was the heart in your heartbreak, the miss in your mistake”) and Girl Of 1000 Dreams (“See my friends, lose my head/ Wake up with you in my bed”) heavenly, and the wall of well-chosen tones. The album just works as whole. It shows that these Brooklynites are not just obsessive underground music scholars – they’re in it for the long haul. It will be exciting to see how their catalog progresses, but for now we’re left with an album that should reach a new audience and keep original fans pleased.

The Pains Of Being Pure At Heart MP3s or CDs

The Pains Of Being Pure At Heart on Spotify