The Prodigy – Invaders Must Die 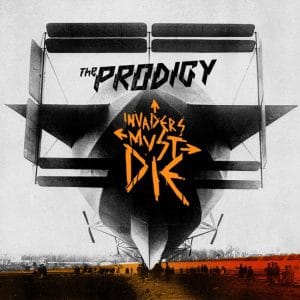 With Keith Flint and Maxim gone, a lukewarm reception for 2004’s Always Outnumbered, Never Outgunned, their record deal with XL over and a greatest hits compilation and tour that often forms the final nail in the coffin of many artists’ careers, it seemed that The Prodigy‘s star may have been fading.

Perhaps this is an overly bleak take on matters as both Always… and the singles compilation hit Number 1 and the tour saw a band that were clearly still at the peak of their powers as a live act. But you couldn’t help feeling that while Liam Howlett is the creative force, or indeed the prodigy, behind the music, the Prodigy had lost something when it became a one-man band.

But it was on that reuniting live tour that the three core members, who’d started out raving together as mates in Essex nearly 20 years ago, found their spark was rekindled to collaborate again. Invaders Must Die is the result and if there are those out there that think the Prodigy are a spent force then this energetic, acerbic assault on the senses will serve as a timely denial of such notions.

The Fat Of The Land may have given the band their greatest commercial success but creatively what had gone before on both Experience and Music For The Jilted Generation was far more varied, enriching and challenging. Always Outnumbered, Never Outgunned may have had its moments and is far from a poor album, but Invaders Must Die sees the Prodigy returning to what they do best: hard, aggressive dance music that is guaranteed to grab a crowd by the throat and force them to move.

The title track gets it all going. Its granite-like beats, squealing hook and grinding guitar riff kick off an album that is unrelenting, hard as nails and unwilling to bend to expectation or convention. Lead single Omen follows and even has a singalong chorus, but that is placed in the midst of nosebleed-inducing beats thundering down and the kind of manic synth sounds the Prodigy first made their name with.

The album contains flashbacks to every phase of the band so far, from the rave stabs and helium skat of the fantastic Take Me To The Hospital and the old skool breaks and speaker destroying bassline of Warriors Dance to the rock heavy riffs of Colours and Keith Flint’s trademark sneering on headbanger Run With The Wolves. The sampling of Outlander’s Vamp on World’s On Fire will give many an old white-gloved raver cause to grin, but rockers and ravers should be equally pleased with the album overall. One criticism could be that there really is no let-up to the aural onslaught, but if you prefer more sedate sounds you probably wouldn’t buy a Prodigy album, would you?

The psychedelic big band finale of Stand Up exemplifies above all that even after almost two decades, this is a band still willing to plough their own furrow, try out new ideas and flick the finger to anyone who expects them to retread old ground.

As a distillation of the pure energy, passion and dancefloor destroying that has always run through Howlett’s productions, Invaders Must Die could possibly be the Prodigy’s best album yet. A full on party album guaranteed to appeal to fans of any phase of the band’s evolution and proof that there’s more than just life in the old dog yet, there’s a full-on warehouse rave.

A statement for all of the limp new rave pretenders to pack up and fuck off, a return to form rarely sounded or felt so exciting.