The Prodigy – No Tourists 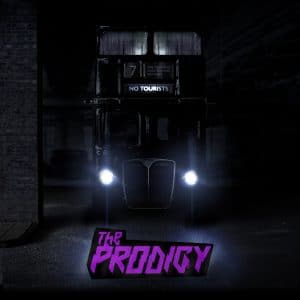 As British sitcom Peep Show lives on to entertain a new generation of teenagers, it’s worth recalling Jeremy and Super Hans’ love of big beat – did Keith Flint have many better hooks than “this is outrageous / this is contagious”? But the references don’t quite land these days. The electronic sub-genre is so old that calling it dated is itself dated. Thus The Prodigy find themselves, on their seventh album, still coasting from the success of 2009’s Invaders Must Die and trying to mine the same old territory for new gold.

The first thing to note is how many references, or rip-offs, of old Prodigy material there are on No Tourists. What if you take the synth riff and guitar line from Voodoo People, but separate them into two songs (Light Up The Sky, Champions Of London) respectively? What if you sample a different Ultramagnetic MCs track (We Live Forever) or speed up some more faceless female vocals (Timebomb Zone)? The original ideas had merit and the old tunes still pack a punch to this day, but when recycled like this it sounds like Liam Howlett et al. are artistically spent.

Opening track Need Some1 starts with a frantic, squawking synth, reminiscent of the build-up to a Chase & Status track, followed by a lumbering drum break that feels very limp compared to modern bass music. It could be a worthy build-up if followed by something more consequential, but those two elements just loop around for the duration. The same is true of the title track, which adds some angsty lyrics (“no tourists, no sight to see”) and a meandering melody to the mix but just doesn’t have enough impact to be faithful to the group’s legacy.

Boom Boom Tap shows more of a finger on the pulse, borrowing from the sounds of EDM-trap. It’s a shame that this is undermined by a gimmicky vocal but it’s still one of the better tracks on the album, one of the few that takes things further than a Prodigy tribute act. Resonate is another song that works, with Maxim Reality’s vocoded lyrics giving way to a punchy half-time drop and rave stabs that genuinely evoke the early ’90s heyday without being derivative of it. These moments are far too few, however, and don’t make up for the other dreck on display here.

Champions Of London is a forgettable foray into drum’n’bass, with Flint’s vocals (“civil unrest / grab the bulletproof vest”) coming off like a 49-year-old man trying to recapture the bad boy image of his youth. Fight Fire With Fire, a collaboration with Ho99o9, is very noisy, so much so that many of the lyrics are buried by the abrasive synths. Meanwhile, the closing track Give Me A Signal with Barns Courtney is a moment where the style and substance are both there, featuring an acidic 303 line and a dramatic final section. It seems that the record saves its best for last.

After the release of their last album, The Day Is My Enemy, Howlett mulled over the idea of only releasing EPs: “We’re not really bothered about releasing albums any more, it just bores the shit out of me. The whole process just takes too long”. No Tourists is a change of heart, but it proves Howlett’s instincts right with its lack of inspiration. Making this record probably did bore them, just as it bores this reviewer to listen to most of it, and while there are signs of life in places it’s mostly, to quote Jeremy, so futile.