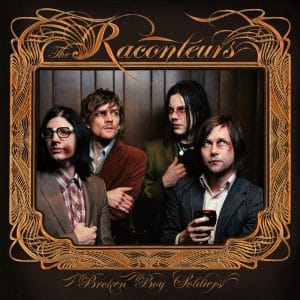 Jack White has seemed frustrated with the constraints of The White Stripes for a while now. About an album and a half, if we’re keeping score. If The Nurse, the marimba, and Get Behind Me, Satan told us anything, it was that Jack had grown tired of red, white and black, what he really wanted now was a nice pair of tartan slacks.

But he couldn’t in The Stripes. He was the one who had set the boundaries, and to break those rules would be a slight on his integrity. And as any good Southern gentleman knows, without integrity, you’re nothin’. Enter one Brendan Benson and two Greenhornes (Patrick Keeler and Jack Lawrence), and bingo-bango, an opportunity to wear clothes not designed by Gerrit Reitveld.

But The Raconteurs aren’t, as they keep insisting, a side project. No, the band sit front and centre in everyones priorities, eyes all focused on this ball. But, and herein could lie the briar patch, it isn’t just one focus, it’s four. Three of which belong to people who presumably have been doing exactly as they please in their musical ventures.

So how does it work? Is Jack, glad to be able to look behind him and not be thrown a post-coital gaze from a drummer who has seen him naked, happy to play second fiddle? Or are the others, grateful to be bowled along on the back of White’s hyper-mega-giga stardom, willing to sit back and just reap the rewards?

Actually, it’s neither. Brer Rabbit escapes from his sticky trap through the power of Democracy – you can sense that everyone had their say in the way Broken Boy Soldiers sounds. Ah ha, Mao Tse Tung! Thwwwpt, Vladimir Ilyich Ulyanov! That’s one in the eye for your red factions!

The problem is, while all members of The Raconteurs may have been born equal, turns out that some are more equal than others.

Because it’s the songs that sound most like Jack that really soar: the Mick’N’Keef circa 1971 woozy trudge of Blue Veins, or the frankly astounding Broken Boy Soldiers: the sound of Led Zeppelin and Black Sabbath having a brawl in a pub car park, with White standing by the side screaming at them to “leave it, he’s not worth it!”. Compared to that, the archetypal Benson ‘doggone-it, she-left, aw-shucks’, jangle-pop of Together and Call It A Day just can’t compete.

However, there are still moments when all the particular gifts on offer blend into something spectacular. The ‘Hornes stick their rhythm oar in with the Kinksian gait of Steady As She Goes and help turn out a brilliant slice of sixties pop, while the organ enhanced psychedelia of Store Bought Bones swirls, darts, and speaks in tongues, and is peculiarly brilliant. And if there’s one thing you didn’t think Jack White needed, it would be organ enhancement.

Is it slightly churlish to suggest that Broken Boy Soldiers could have been slightly better? Probably. It’s a hugely enjoyable record, with songs on it as good as anything the individuals involved have produced elsewhere. It’s simply that high standards achieved elsewhere aren’t consistently obtained throughout. But it certainly seems that from a reinvigorated sounding Jack’s point of view, two members good, four members even better.