The Rapture – In The Grace Of Your Love 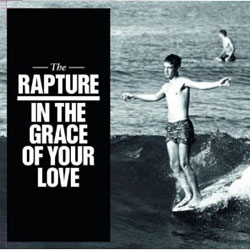 Having successfully moved trendy dancefloors with Echoes, The Rapture returned with a record of significant polish, boasting Woo! Alright – Yeah…uh Huh – a track that sniped at those who were still too scenester to dance. “People don’t dance no more, they just stand there like this,” they exclaimed with exasperation, before breaking into an irresistible instrumental that flipped metaphorical Vs at the guilty, daring them to resist testing the seams of their spray-on skinnies.

That must’ve made deciding on objectives for the fourth album quite difficult, but if their aim was to pack out the gaps and smooth off rough edges of their sound, then In the Grace of Your Love must be considered quite the impressive follow up.

After flirtations with another label for Pieces of the People We Love, the band have returned to DFA, on which Echoes was released, having been produced by the hands of ex-LCD Soundsystem frontman James Murphy. Now, Cassius’ Phillippe Zdar lends his ear to this latest record – and its electronica rhythms and intricate layering bear the hallmarks of those French touches.

Whether the ambiguous ‘grace’ in the title refers to an admiration for their subject’s beauty or downright humble disbelief, the album’s focus is firmly on love; only the kind of love that’s always the indebted underdog. Detailing the ups and downs of the path to happily ever after, it begins with Sail Away’s ‘us versus the world’ romanticisms of that are written in scripts featuring elopes to Gretna Green – to a deliciously full pulsing synth soundtrack.

Dance-punk hasn’t been wiped entirely off the menu. Miss You’s bitter love-lost lines are prefixed by the same clattering drums as Pieces of the People We Love. Similar bass rhythms crop up with Rollercoaster’s musical dips and rises and sung descriptions of the ecstatic highs and crashing lows of romance. And the title track is played out to a march with simple but effective repeats of its riffs and keyboard flurries. This more soulful side is carefully dotted around the barnstormers to vary the pace, closing proceedings with It Takes Time To Be A Man’s high school slow-dance wisdom.

In between these more reflective tracks there are others occupying a carefully placed middle ground. Blue Bird’s Bee Gees falsetto lines and wind-up rhythms wash into drum rolls, while Never Gonna Die Again’s slow burning climb bears the emotionally battered declaration, “Every day you pick me up and put me down.”

But it’s the all-out dance moments of exhilaration that shine most brightly. After opener Sail Away, there is Come Back to Me – the New York trio’s slice of Ibiza where Luke Jenner’s distinctive vocals explain love’s dopamine highs. Gospel choir backing vocals weave in and out to an insistent beat and accordion loop, before a break transforms the track into a piece of deep, moody house with shaking basslines and kitchen utensil beats.

Children is The Rapture’s irresistible anthemic answer to Soulwax’s remix of MGMT’s Kids. And How Deep is Your Love follows in a similar vein with piano loops that are a bit house, vocals and hand claps that bear fleeting hints of gospel, and beats that are a little bit Hot Chip calypso. As the first album single, it’s an emphatic signal of intent with a sublime saxophone solo to boot.

The collection of 11 tracks are both majestic and effortless – qualities that give the album a feeling of natural progression, perhaps bettering what’s gone before. The Rapture still do dance-punk, but they’ve made space for more funk and soul rhythms. And thankfully, they’ve left more room than ever before for out-and-out dance invention; and it’s here that they reach the kinds of echelons that their name hints at, making it a record whose basslines the ears will regularly crave.

The Rapture MP3s or CDs

The Rapture on Spotify