The Raveonettes – Raven In The Grave 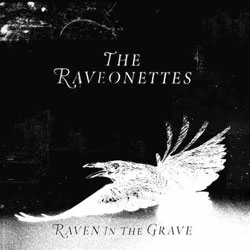 Five albums in eight years is a pretty good rate for any band. Releasing one LP every two years has earned The Raveonettes a solid fanbase, even though the Danish duo’s style hasn’t changed dramatically down the years. Their formula of ’50s/’60s inspired rock with dark lyrical undertones has worked well for them and, on their fifth effort Raven In The Grave, it’s business as usual.

Yet there is a darker-than-usual feel to this record. War In Heaven features sparse twinkly percussion that, in this context, gives an air of paranoia and isolation. Apparitions is equally distant and rather ghoulish, with vocals that sound possessed at points and, towards the end, every instrument collapsing in on each other to produce something like a strangled cry for help. Even the intro of Evil Seeds is twisting and unsettling before it kicks into gear with alarming splashes of synthesiser.

Given the moodier and darker template, it’s a shame to find that the songs are annoyingly hit and miss. The album opens with a track that falls in-between the good and the bad, Recharge & Revolt. It introduces itself with the usual fuzzy guitar swoons and sultry vocals from Sharin Foo that hook from the off, but it meanders for far too long and feels like it’s been stretched for the sake of it.

Other songs sound rather lazy. Summer Moon features a chord progression that is all too familiar, Let Me On Out is just dull and the final song, My Time’s Up, is a bit too close to a retread of the band’s older material for comfort. Forget That You’re Young and the buoyant Ignite almost make up for the shortcomings, but it’s frustrating nonetheless.

The mixed quality of the tunes isn’t the only issue here. The burning question that remains unanswered to an extent is this: how much longer how can they play in this style without running out of ideas? On the one hand, they’ve somehow managed to get five albums out of it without making an awful record, but some of the material here suggests that there’s little left in the tank.

Whether you enjoy Raven In The Grave will depend on how much progression you’re after. Chances are that if you liked any of the previous Raveonettes records then there’s enjoyment to be had. But it’s a hit-and-miss listen that, at points are breathtaking, but more often than not it falls closer to mind-numbing.

The Raveonettes MP3s or CDs

The Raveonettes on Spotify