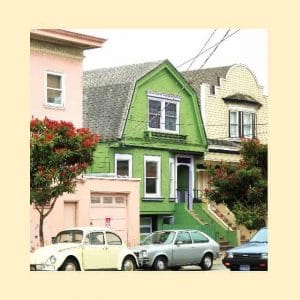 Glenn Donaldson’s cosy lo-fi vocals on the dazzling new album of jangly DIY indie rock by The Reds, Pinks & Purples eerily remind us of gravelly Guided By Voices front man Robert Pollard. Indeed to his credit, Donaldson has put out almost as many wonderfully complex albums, under an assortment of names, as the prolific Ohio musical genius. This third album, following last year’s astounding You Might Be Happy Someday, acts as a heartfelt tribute to his hometown’s creative milieu, disillusionment in the face of excessive gentrification, and has the San Francisco native ruminating on his boundless capacity for intimate and intellectual stimulation.

Taking cues from the bands on his beloved Sarah Records and the whimsical peculiarities of Television Personalities’ Dan Treacy, Donaldson possesses a voice suffused with youthful momentum even as it lays bare the extreme shortcomings of human nature and there’s a delectable cruelty to his apparent subjectivity that will be familiar to anyone who has had their hearts broken. Scattered dreams and deferred sentiments loom ever present on songs like the philosophical Biggest Fan as he engages his discomfort with former loved ones, tracing their doomed trajectory and the resulting isolation.

Kicking against conventional mores, I’m Sorry About Your Life deliberately lacks the sensitivity displayed elsewhere on the record as Donaldson takes a mischievous look at a former lovers stumbling current relationship, sarcastically teasing “tell me again about your friend, oh that’s right, you might marry him”. The inclination for critiquing moments of despair threatens to render the album as being mired by self-pity, but the skilfully upbeat melodies employed succeed in creating a heady rhythmic experience that disregards misery and is filled with silver lined sublimations.

The Record Player And The Damage Done, with its attendant Neil Young aphorisms and husky riffing, has the world wise Californian resisting demands to undertake spiritual rebirth from fraudulent shysters, recognising how destructive it will be on him. On the sublimely autobiographical Sympathetic, the breathy narrator seeking companionship asks “Is it ok to hang around with you, can I run, run along with you”. The album’s emotional peak might well be during the romantic contritions of A Kick In The Face (That’s Life) as Donaldson’s defiant internal promptings and unsettled observations cut through the thorns, finally helping him let go of the familiar entanglements that have been keeping him prisoner for so long.

The Reds Pinks & Purples on Spotify