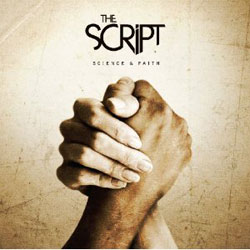 The Script are the type of band every struggling musician who has busked, borrowed and begged to be signed would love to hate.

The release of their first single We Cry in 2008 garnered enough airplay to secure an impressive slot in the top 20 of the UK singles charts, and its follow-up The Man Who Can’t be Moved charted at Number 2 less than six months later.

As if that wasn’t enough to rid them indefinitely of the label of being a one-trick pony, the Dublin born trio’s self-titled debut album shot to Number 1 in the UK album charts the same year and netted worldwide sales of more than two million copies. Add to this a personal invite from Sir Paul McCartney to support him for the US leg of his recent world tour, and you are somewhere close to gauging The Script’s rise to fame.

How does a band who’ve achieved all this commercial success ensure more of it? As Maroon 5 have already demonstrated, it takes more than a painful break-up and a catalogue of heart-felt memories to sustain a commercial band’s career.

From a band who make no apologies for penning the most unashamed lyrics about being in love and all the emotions derived from it, listeners can expect the same cocktail of melodies unravelling tales of break-ups, make-ups and this time unemployment in their second album Science & Faith.

The opening track You Wont Feel A Thing is a rock-pop grower which oozes with heroic chivalry and there is no mistaking the fearless falsetto of singer/songwriter Danny O’Donoghue who sings “Coz everything the world could throw, I’ll stand in front I’ll take the blow for you.” This is classic The Script – and you’ll either love it or hate it.

For The First Time is the tale of a couple who reignite their relationship after they both find themselves unemployed. Never has a song about joining the dole queue been so alluring – or, in 2010 Britain, so timely. This narrative songwriting is typically formulaic of the Dublin three and illustrates their ability to marry lyrics and music with ease but at the compromise of neither.

The stylistic intro to the album’s namesake Science & Faith leaves no question as to its creator. A classic love song looped with boy band harmonies and accompanied by a non-intrusive guitar riff, it has all the chart-fodder makings of another Top 10 hit.

Walk Away and This = Love are upbeat, tightly produced pop numbers with definite RnB infusions, the latter of which sees the band try their hand at a modest rap indicative of Mark Sheehan (guitarist) and O’Donoghue’s formative years spent in the USA.

Following on from the success of their debut album was always going to be a hard act to follow. Rather than spending months, weeks or some cases years deliberating on how to reinvent themselves, The Script have clearly channelled their energies into a tried and tested formula. Business as usual then, as The Script stick to the script.

The Script MP3s or CDs

The Script on Spotify