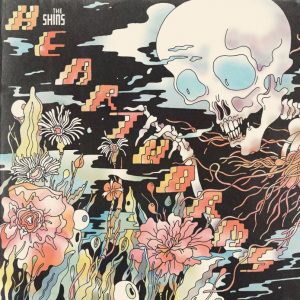 Five albums into the career of The Shins, one continues to wonder whether that career would have taken the same path had it not been for the prominent role of their music in the 2004 film Garden State. Natalie Portman’s declaration that their song New Slang is life-changing caused their first two albums to sell twice as many copies than they had until that point, and The Shins went from being an under-the-radar band to a central part of the indie-rock zeitgeist, endorsed by Zach Braff at a time when people apparently cared about what Zach Braff endorsed.

While Garden State certainly changed things for The Shins, their overnight renown didn’t leave them struggling to cling onto that commercial peak. There was never any sign that they were striving to come up with their next New Slang, and their work has matured steadily, keeping in line with indie-pop trends while continuing to sound recognisably like The Shins. But perhaps it’s the soundtrack royalties that have enabled them to spend time on each subsequent album: Heartworms comes five years after their last album, Port Of Morrow, which in turn came five years after Wincing The Night Away.

The Shins has always consisted of James Mercer and a rotating line-up of other musicians (to paraphrase Mark E Smith, if it’s Mercer and your granny on bongos, it’s The Shins) but with Heartworms he adds three new players to the band. It’s testament to his solidity and vision as a songwriter that a recognisable Shins sound persists, and it’s also gratifying that as principal songwriter Mercer is able to explore quite personal themes with his songs. Name For You is one such song: it’s inspired by Mercer’s daughters and sends them forth into their lives as empowered women while acknowledging the resistance they may face from “somebody with an antique notion”.

The autobiographical Mildenhall is a particular highlight. It goes back to Mercer’s teenage years in the UK: when he was aged between 15 and 19 his father, who was in the US Air Force, was posted to RAF Mildenhall in Suffolk. Mercer has spoken of how this spell in England, and the exposure to British indie bands it gave him, informed his development as a musician. That’s very much spelled out here. “A kid in class passed me a tape,” he sings, “A band called The Jesus and Mary Chain.”

In Mildenhall the music takes on elements of UK lo-fi and of Americana, echoing the transatlantic influences on Mercer’s songwriting. But elsewhere there is classic, yearning pop in Cherry Hearts, and indie-punk in Half A Million; while lead single Dead Alive, whose Halloween themes were outwardly on display in the song’s video, could easily be from one The Shins’ first two albums. Fantasy Island is more synth-led; the melodies are identifiably Mercer’s, but the arrangement is more forward-looking, and the track is a standout here.

So Now What is another synth-driven track, and it’s slower and more spacious then your typical Shins song. Smooth but somehow hesitant, it is the track here that best encapsulates the album’s titular Heartworms. “Now I’m trying to figure out when it was you gave me these heartworms / I feel them wriggling in my blood,” Mercer sings in the song with that title; and it’s a lovely metaphor. The evolution and maturation of The Shins might continue at its steady pace with this record, but it’s all the better for the sense of nostalgia that pervades it, seeping from both its music and its lyrics.