The Shoes – Crack My Bones 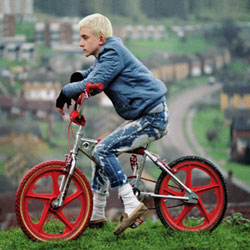 The Shoes occupy the same genre slice as many credible eclectically poppy bands at the moment, all of whom find themselves shoehorned into the ‘indie electro’ box, to prevent people assuming their brand of music bears any resemblance to The X-Factor banality.

Pop for some, after all, has negative connotations. That might also explain why they’ve been complicatedly labelled as French disco existentialists. But the definition isn’t actually inaccurate, because the duo from Reims – Guillaume and Benalways – have a wholly effective, matter-of-fact way of expressing their emotional reaction to people and situations in their lyrics.

That said, their easy likeness to a number of other artists does prevent them from breaking new ground. Yet the tracks are served with bucketloads of danceability, which makes them inherently memorable.

Stay The Same describes the album perfectly. It’s upbeat, percussion-led, and reminiscent of fellow countrymen Phoenix. While that means it won’t start a music revolution, it’s polished and remains in your head after the album’s finished – this puts a skip in the step rather than inciting curses directed at the temporal lobe for its poor choice of internal soundtrack.

Prince-esque falsetto vocals and drumstick clatter beats give Cover Your Eyes a deeply rhythmic groove. And Wastin’ Time has extra helpings of melodic pianos and synth, which ooze a sorrow not dissimilar to Miike Snow‘s Burial.

That same effervescence continues on People Movin’, with Primary 1 as guest star. It’s an Outkast track that Andre 3000 could’ve penned himself, but isn’t the strongest of the collection.

If Glee covered Arcade Fire you might arrive at something like Time To Dance. That comparison shouldn’t do them a disservice, because after a few listens it’s hard not to submit to its infectious positivity, insistent piano loop and cowbell.

CocknBullKid‘s guest vocals on Clich� hark back to Ladyhawke or New Young Pony Club‘s aloof yet somehow sultry vocals. There’s also a deeper, darker side to the duo, audible on Crack My Bones, which like the previous track makes them sound like altogether different artists.

Despite an air of Friendly Fires bouts of percussion disco indie – especially on Investigator – The Shoes do feel more MacBook Pro than a live proposition. And Bored reveals another trick to the band’s pop box, with more than a hint of French house about it.

Because Crack My Bones is an album which flirts with guest stars and musical influences, it can appear a little formulaic. But that still doesn’t take away from the fact it’s a great listen. Guillaume and Benalways pack a lot of variety into their music which, when paired with honest lyrics that give knee jerk tales of emotion, makes The Shoes difficult not to like. It’s this that makes their existentialist disco pop label seem to fit quite well. Even Mr Existentialist himself, Friedrich Nietzsche, said, “Without music, life would be a mistake” – and that’s the conclusion you imagine The Shoes want to be drawn from Crack My Bones.