The Sleepy Jackson – Personality: One Was A Spider, One Was A Bird 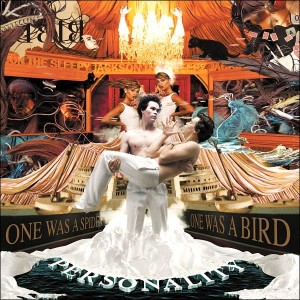 It’s a rare thing that I am sent a new album to review that I continue to explore after having – very vigorously of course – listened it for the purposes of passing judgment. The Sleepy Jackson’s Personality – One Was A Spider, One Was A Bird, however, I’m going to want to hear every day, and for the rest of my life.

The Sleepy Jackson, vehicle for the mad Aussie genius that is Perth-based Luke Steele, received universal acclaim for their 2003 debut Lovers, which was an idiosyncratic collection of summer-pop classics. Last year Steele settled into a Sydney studio with a new line-up consisting only of himself and drummer Malcolm Clark, aided by producer Scott Horscraft and what sounds like a legion of session musicians. The resulting album sees Steele’s vision moving on to a new level, and he takes popular music as we know it with him.

Personality is a grower. On first listen it might sound like a collage of Beach Boys harmonies and Spector-esque production (all trumpets and strings, this album sounds like a great big hug). You might initially think this an album of atmosphere and mood. But after a while shapes form and the structure of this masterpiece become clear – a wash of beautiful melodies and sumptuous chord changes that sit somewhere between George Harrison and Echo and the Bunnymen.

Steele has come as close as Brian Wilson himself to recording what Wilson termed Pet Sounds as: “a teenage symphony to God”. But wait; isn’t every other new band on the scene nowadays fobbed off with the kiss of death that is the staple term of music-journalism-by-numbers, ‘Beach Boys harmonies’?

Most bands described this way are simply pay homage to Wilson’s vocal innovations and Phil Spector’s lush productions by imitating them. Personality is what the legacy of those monoliths should be inspiring – adding a modern, personal, and original ingredient to these existing pop formulas that have been proven to work so well. Magnificent.

I could pick any of these songs for special attention, because from the opening shuddering strings of You Needed More to the mournful outro of How Was I Supposed to Know we are dealing with one of the most consistent and complete records this side of the twentieth century. Devil Was in my Yard’s soaring vocal gymnastics (in the backing vocals!) offer particular sublimity, while Dream On is a delicious slice of pop perfection that sounds like it might be from the Grease soundtrack, only far, far better. The most staggering track on the album, I Understand What You Want But I Just Don’t Agree is pure Purple Rain, which fits well with Steele’s Prince-like vocals. Here we have three minutes of perky string riffs over an ecstatic soul train beat.

I made the mistake of listening to Personality while cleaning our putrid kitchen, and thus suffered the confusing duality of smelling the rotting whatever-it-was in the bottom of the sink and the sweet, sweet music filling my ears with fragrance. Then there was the inevitable gliding around on the kitchen floor to the more discoey bits, such as Play a Little Bit Of Love. I didn’t get much done. The lesson is: Personality is so good, you’re always going to have to stop what you’re doing when you hear it. Is it too much to ask the whole world to have a sit and a listen? And that if they did there’d be no more wars?

The Sleepy Jackson MP3s or CDs

The Sleepy Jackson on Spotify