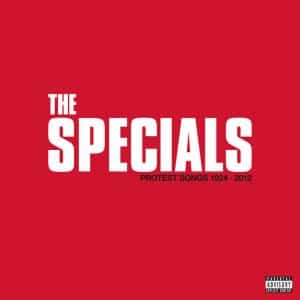 It is, of course, hugely appropriate that The Specials should tackle a cover album consisting entirely of protest songs. They recorded Free Nelson Mandela, which became an iconic anthem in freeing the future South African President, produced Ghost Town, which became synonymous with the 1981 riots in Brixton and Toxteth, and were instrumental in forming movements such as Rock Against Racism.

Now, with the country more bitterly divided on political grounds than ever before, there seems to be a dearth of protest singers, with the exception of the excellent Grace Petrie. So it seems natural that the protest singers of yore make a comeback.

As the title would suggest, the band, now consisting of the core trio of Terry Hall, Lynval Golding and Horace Panter, follow up their Number 1 album Encore with a carefully selected selection of protest songs, originally recorded between 1924 and 2012. It’s a carefully curated collection avoiding anything obvious: looking down the tracklisting, only Bob Marley‘s Get Up Stand Up could be described as a famous protest song. There’s no obvious choices like Bob Dylan, Pete Seeger or Woody Guthrie to be seen.

Kicking off with Freedom Highway by The Staple Singers is a wise move – The Specials’ version is a lively, uplifting number which you’d imagine will sound terrific live. Curiously, it’s one of the more upbeat tracks on an album which sometimes sounds strangely downbeat.

The more successful moments come when the band experiment with their source material. It’s fair to say that Talking Heads aren’t known for their protest songs, but Listening Wind (from their classic Remain In Light album) is certainly one of their more political songs). Hannah Hu takes over vocals, replacing David Byrne‘s understated whisper, and imbuing this tale of a young African terrorist planting bombs to drive away American imperialists with some real soul.

Their take on Big Bill Broonzy‘s Black Brown And White is also successful, Broonzy’s lyrics of “If you’re white, that’s all right, if you’re brown, stick around, but if you’re black, oh brother get back” still sounding as sadly relevant today as it did when it was originally written in 1938. The old Frank Zappa track, Trouble Every Day, sounds as world-weary and quietly angry today, reflecting as it does on racial violence and injustice. It’s a sad reflection that many of the more overtly political songs, no matter when they were written, can still hold a mirror to today’s society.

Leonard Cohen‘s Everybody Knows is a odd choice though – it’s not so much a protest song, as a look at society through Cohen’s cynical and jaded eye (“Everybody knows the fight was fixed, the poor stay poor, the rich get rich, everybody knows”). It’s a wonderful song, no matter whose hands it’s in, but Hall can’t quite match Cohen’s famously lugubrious bass-baritone. But then, few people can, in fairness.

Inevitably with an album full of cover versions, there are some choices that work better than others. It does a good job of shining a light on artists who may not be as well known as others (such as the version of poet Rod McKuen‘s Soldiers Who Want To Be Heroes, which nails the pointlessness of war), and it’s impossible not to be moved by the power and passion of Lynval Golding’s vocals on Marley’s Get Up Stand Up – it could almost have been written for The Specials.

Protest Songs is not likely to prove as much as a career renaissance as their last album Encore did, but it’s an interesting and moderately successful little detour from a band who are probably well overdue their ‘national treasure’ title.

The Specials MP3s or CDs

The Specials on Spotify