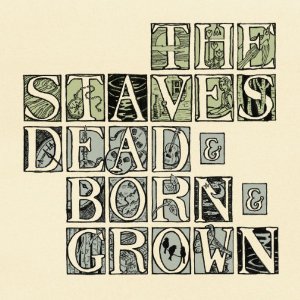 The folk revival over the last couple of years has led to a host of UK artists coming under the spotlight, from Laura Marling and Noah And The Whale to newcomers such as Dry The River and BBC Sound of 2012 winner Michael Kiwanuka. In fact, folk has been so prominent in the charts that there has been somewhat of a critical backlash, with the main target being the hugely successful Mumford And Sons. The latest act to join the folk party are Watford sisters, Emily, Jessica and Camilla Staveley-Taylor – better known as The Staves.

However, it is not just a case of jumping on the bandwagon for the three talented sisters. The Staves had been perfecting their vocal harmonies in their local pub for years, before they started talking to labels after both Emily and Jess had completed university. They even ended up singing backing vocals on Tom Jones’ 2010 album Praise & Blame, while having talks with Island. And Jones wasn’t the only one impressed by their vocals. After signing for Atlantic, The Staves supported Bon Iver on tour – which included playing in front of 12,000 people at Wembley Arena.

The band may already have some very well-known and impressive fans, but that means nothing unless they can prove themselves on their debut album, Dead & Born & Grown. But any concern about The Staves not being up to the task are swiftly dismissed just one minute into the opening track, Wisely & Slow. It’s a startling way to kick off the LP, with the opening minute stripped down to just the beautiful vocal harmony of the three sisters, before an organ subtly creeps in half way through. Not only is it a bold and ambitious way to open their debut record, but the stunning simplicity evokes comparisons with the legendary Joni Mitchell.

The Staves are not necessarily doing anything new on Dead & Born & Grown, but it doesn’t really matter when what they are doing is so wonderfully executed. The Motherload is another example of the trio’s simple, but compelling formula, one which rests a great deal on their flawless harmonies. “At the banks of the river, forever the same/though no water flows here, the memory stays,” they sing, over gentle, comforting acoustic guitars. Then there’s the alluring Facing West and charming In The Long Run, both of which, demonstrate the effortlessly enchanting quality to the sisters’ unfussy combination of lackadaisical acoustic guitar melodies and glorious vocals.

However, while The Staves’ debut may be a heartfelt and soothing record, the three sisters also demonstrate moments of intensity. Pay Us No Mind, which delves deep into the American folk tradition, even features the rather surprising line, “I don’t give a fuck”, before bursting into another signature group harmony. While Tongue Between My Teeth drives forward with more intent than anything else on the album, with a sinister threat rapped in a harmless vocal harmony: “And I know it would do no good/ but I’d hurt you if I could”. Dead & Born & Grown may sound laid-back at times, but the lyrics always retain an edge that never allows it to drift towards complacency.

While the nu-folk movement is beginning to turn into something of a Battle Royale, there is no doubt that The Staves deserve the recognition that is finally coming their way. Dead & Born & Grown may occasionally lack variety, but it is never void of vocal talent. It’s not surprising that Bon Iver and Tom Jones have already fallen under the spell of The Staves and their enticing harmonies, but there is more to their debut LP than just that. Emily, Jessica and Camilla have put a new spin on an old formula by reducing their sound to its simplest form – and for the most part it is a success. On this evidence, The Staves are in it for the long haul.