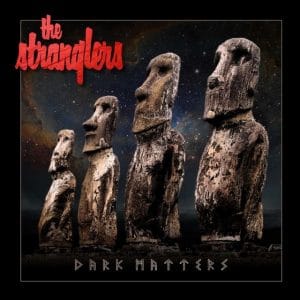 The Stranglers’ first album release in nearly a decade arrives in sad circumstances. Most of Dark Matters had been recorded when the band lost keyboard player Dave Greenfield, who died from complications arising from covid-19. The rest of the band, headed by senior personnel JJ Burnel and Baz Warne, decided to complete the record in his honour.

Their band mate would be proud of the achievement. The distinctive tones of his instrument appear in the first few seconds of Water, the distinctive swirl of the organ complemented by fulsome bass and a triple time rhythm setting out with positive intent. The song itself alternates between steely edged instrumental and ballsy chorus, a sign of things to come.

Much of what follows is vintage Stranglers, incorporating tributes to their departed friend. These are done both explicitly (the touching song And If You Should See Dave…) and by association (This Song). The latter could be about a love affair, but the closing line is telling. “This song will get me over you,” goes the familiar couplet, but adds the words, “if that’s what I really wanna do”. The explicit tribute is an elegiac one, bringing a tear to the eye.

Burnel considers Dark Water to be one of the band’s finest albums to date – and he has good reason. It celebrates everything they have done so well over the last 45 years, taking no prisoners while adding humour and the occasional but striking moment of tenderness.

A strong opening salvo is energetic and uplifting, and is followed by the affecting tributes. There is then a bit of a dip in the middle, by Stranglers standards at any rate, with both No Man’s Land and Payday full of attitude and storytelling but stopping short of melody. Down gets us back on track, a kind of Parisienne Walkways equivalent with its pensive emotions.

The closing trio are a different matter entirely. The Last Men On The Moon is up there with one of the band’s best songs. Starting off with the Stranglers’ familiar cheery swagger, it is an inspired commentary on the colonisation of our satellite companion. Mocking the empty ambition of the human race in the face of inequality here on earth, the cut of its jib points directly at the recent efforts of Messrs Bezos and Branson, competing to see who can spend their money quickest to get into space. There is a pertinent sting in the tail, too, as Greenfield’s keyboards burn brightest on re-entering the atmosphere.

White Stallion follows, an ambitious piece of work featuring a male chorus with a richly voiced soprano, underpinned by a chorus of strength and resolve. Greenfield returns with a cheery riff for Breathe, its impressive arsenal of instruments let loose with another substantial chorus. Floating in the background is the haunting profile of Baz Warne’s guitar, drifting over the wreckage with a studied poise.

Dark Water is exactly as JJ Burnel described it, an album to rank towards their best long-playing achievements. “Fight to the bitter end” is the final lyric we hear, a wholly appropriate send-off for Dave Greenfield. His keyboard will be greatly missed, but there are signs on this record that the band could continue honouring his memory through new and continually vital music. The Stranglers’ fire burns as brightly as it ever has.

The Stranglers MP3s or CDs

The Stranglers on Spotify