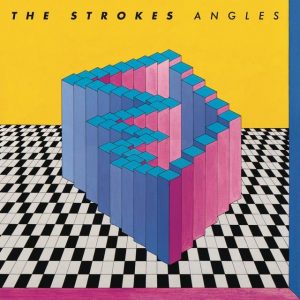 It’s been five years since we last heard from The Strokes, and in that time they’ve largely abandoned the formula that made their seminal 2001 debut, Is This It an unexpected milestone record. There’ve been natural links in The Strokes’ evolution though, as each album has marked a progression from what came before it. So, with five years between outings, it makes sense that Julian Casablancas and company have taken some time to woodshed and rebrand.

Angles as a whole is not by any means a return to form for The Strokes (though lead single Under Cover Of Darkness certainly fits right in with the rest of the band’s body of work). Instead, it feels like a scorched earth imagining of what The Strokes minimalist debut might have sounded like had it hit a decade later. That said, Angles is not the same lo-fi Velvet Underground-meets-Guided By Voices sound that made The Strokes rock ‘n’ roll icons. But it’s still got the same soul.

Certainly, this is the work of steadier hands, more rounded musicians; but it’s also an uncertain hodge-podge with evidence of hyperactive musical tastes, and too many cooks in the kitchen. Angles marks the first time Casablancas hasn’t functioned as the principle songwriter, and it shows. He was even absent at the recording sessions, letting the band record the music together, and going back later – in a separate studio – and recording the vocals by himself.

The result is that Angles finds Casablancas sounding like a man apart: bored, disaffected, and disjointed. But it also finds him reaching outside the mumbling Lou Reed impression that got him so much attention. Instead, we find him sort of screaming in a higher register, sounding at turns frantic and on the verge of collapse. And despite Casablancas not having as great a hand in the formation of the music on the album, Angles is a close cousin to his solo album, 2009’s Phrazes For The Young, all prototypic ’80s motifs and dark sunglasses.

Under Cover Of Darkness is the obvious standout track here, sounding at once like classic Strokes, but pushing the palette to new levels with multiple choruses (each devastatingly memorable) and a cut-time guitar break. Casablancas laments that everyone’s been “singing the same song for ten years”, but given that it’s his song we’re all singing, he seems content to present us with a more current alternative.

The single’s B-side, You’re So Right is all claustrophobic machine-gun high hat taps and synthesized vocals; it’s got the darkness of a heavy-metal song from outer space, but it never quite lets loose of its schizophrenic moorings. Taken For A Fool also features a bouncy, delightful chorus (“You get taken all the time for a fool. I don’t know why.”) and angular, jittery verse patterns and Nick Valensi’s trademark synth-sounding jazzy guitar work (which first appeared in 12:51 way back in 2003).

Gratisfaction is a stylistic departure for The Strokes, and its tone misses the rest of the album, sounding like an amalgamation of Billy Joel‘s Only The Good Die Young and Thin Lizzy‘s The Boys Are Back In Town. Despite these obvious comparisons, Gratisfaction is the most unleashed, loosest track on the album, very much indicating the kind of soul Casablancas is capable of exuding (matched only by 2003’s Under Control). Call Me Back is the album’s other big departure, drumless and stripped down in minor-key lamenting.

Life Is Simple In The Moonlight closes the album on a surprisingly subdued note, during which Valensi seems to take a page from Nels Cline‘s lite-rock-jazz-fusion guitar solo book. There’s also a challenge from Casablancas: “Don’t try to stop us!” Angles shows that The Strokes are still very much a factor in 2011, and rightly so. Disjointed, hyperactive, experimental, whatever. Angles is the album to beat this year.