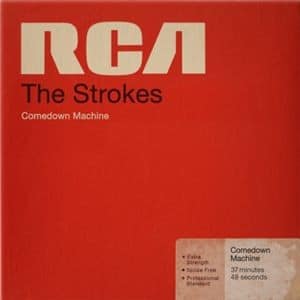 “Brian, don’t fuck with the formula,” warned Mike Love during the writing of The Beach Boys‘ Pet Sounds. He was, of course, horribly wrong, but that was just bad luck – 19 times out of 20 he’d have been right. He would certainly have been right to issue such a warning before The Strokes‘ last, disastrously disjointed album Angles – the first album written by the entire band rather than by Julian Casablancas alone. Comedown Machine, though it is again officially credited to all five members, fares far better – for now there is a steady hand at the tiller, confidently steering The Strokes’ ship into exciting, uncharted territory.

The share of songwriting is not the only formula fucked with. The entire record pays stylistic homage to the ’80s, and Casablancas’ interpretation of this appears to be “sing as if it is 1989 and your voice is yet to break”. A new, languid falsetto tone drapes itself over a good half of the tracks, sometimes doubled with a lower partner, other times leaping upwards on its own like a squeaky, lonely salmon. Of course it will divide opinion, but there was only so long he could keep up that Is This It? drawl before it became, well, formulaic. Salmon have to keep swimming or else they die.

Like that Muse dubstep video, One Way Trigger was a warning shot, calculated to intrigue, delight, and offend in equal measure, with Casablancas’ falsetto rising from a distinctly Swedish valley to reach dog-whistle-high peaks. Any resemblance to a-ha was surely intentional, but their take on Take On Me has hidden depths in its world-weary lyric – “find a dog, settle down out of town, find a dream, shut it down” – and harmonised guitar break.

Eleven tracks that brisk and brittle might have been a little hard to swallow, but the rest of the album is more restrained – though no less entertaining. Tap Out shuffles along on an infectious groove that’s half Michael Jackson and half Destiny’s Child, and once you’ve assured them you are in fact ready, the jelly it offers up as reward is a guitar solo taut enough to make Mark Knopfler doff his headband in respect. Welcome To Japan could be the best song they’ve written since their debut, funky in the way Metronomy have made it OK for white bands to be, almost surreally funny (“what kind of asshole drives a Lotus?”), and from the break onwards, strangely stirring.

Not all ties to the Is This It? mothership have been severed. The straightforward but downbeat chorus of Slow Animals, already derided by the rushed reviews you may have already read, is in fact a real grower. All The Time, in contrast, will hit you straight away with nursery rhyme simplicity and thumping beats, and 50/50 is a throaty, howling tonic after the dirgy drum machine of ’80s Comedown Machine. But for every bit of new-wave there’s a bit of something new, too – Chances just about perfectly captures the vibe of Streets Of Philadelphia, and Call It Fate, Call It Karma hisses and pops with faux-vinyl authenticity.

Just as Is This It? was more than anyone could hope for, the album title is horrendously misleading. This record is fun, it’s exuberant, and it’s diverse – and yet nothing sounds unnatural or feels crowbarred in. Whatever this new formula is that you’ve found, listen to Mike. Don’t fuck with it.