The Strokes – First Impressions Of Earth 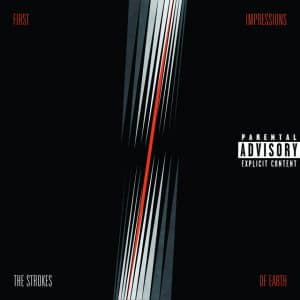 Panic over. The Strokes still sound, mostly, like The Strokes. Despite the (somehow very un-Strokesian) claims that this album is “an attempt to document how someone from outer space would objectively view things happening on earth”, First Impressions… sees the original lithe lounge lizards of the Lower East Side remaining relatively close to type.

The proggy excesses those thoughts threatened are kept at bay, and from the moment Julian Casablancas sighs his opening “Some people think they’re always right”, and Nick Valensi slices a shimmering guitar through the existential fug, type seems like an awfully good thing to resort too.

Juicebox might take a little longer to stick, being possibly the first Strokes single to not instantaneously be your new favourite song ever, but given the chance it lingers long enough for it to go from “What the fuck is that bassline about?” to “I’ve now realised I don’t care, it’s ludicrously fantastic”.

But more than just an opportunity for Nikolai Fraiture to prove that he isn’t just hanging around pretending to be Herman Munster, it’s a chance for the band to show off the positives that then resonate through the record: the shiny new production values that working with David Kahne has given them, something that lifts the sound out of the garage (and into the lower entrance hall at least) and the discovery that after all this time Julian can actually do a pretty fair impression of someone who can actually sing.

For the first six songs, the whole thing is as exhilarating as Is This It, it’s in a different way, undoubtedly, but there’s the same giddy rush of excitement. It still makes you feel like you’re hanging with the coolest people at the coolest party, but upon speaking to them you find they’re a bit older and a bit wiser than before. Oh, and with some slightly more interesting things to say.

The second half may occasionally splutter like a Tory peer being introduced to a single mother, and those splutters are the nearest things The Strokes have ever done to a bad song (15 Minutes, Ask Me Anything), but for each bad Shane McGowan parody or synth-led inconsequential interlude, something always more than redeems it.

Be it the bright-lights-big-city-thousand-mile-an-hour blast of Electricityscape, the spectacular “wait for it… hang on… just a sec, wait fo… nope. You just missed it”, conclusion to Ize Of The World – a trick ending which suitably rounds off a song that seems to be permanently building in intensity – they’ve got tracks which easily stand among the finest things they’ve done.

First Impressions always count and, after the relative failure of their sophomore release, the pressure to make a good one here was always going to be increased. Given that, it’s not surprising to find a vaguely desperate desire to succeed at this record’s core. But succeed it does, it’s an album that goes a long way to closing the seams of discontent on the trousers of credibility that Room On Fire did its best to unstitch. Our favourite New York sons are back, they’re packing cosmic sentiments and they sound better than ever.