The Strokes – Room On Fire 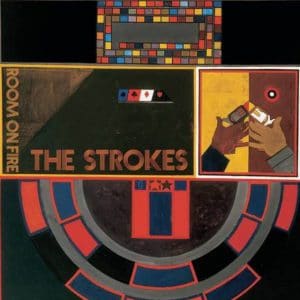 Rarely can so much collective pant-wetting have gone on amongst the supposedly clued-up sections of the music press than that which accompanied The Strokes and their debut album.

2001’s Is This It was certainly aptly titled. Yes it was good, with effervescent tabs like Last Nite generating a smoky New York vibe that blearily paid homage to The Velvet Underground and The Stooges. But it wasn’t that good and, lest we forget, for all the hype, platitudes and sloganeering from the press, it has still sold less than a million copies in the US, a figure that our very own Coldplay wouldn’t get out of bed for these days.

But then The Strokes’ profile was always about more than the music. Singer Julian Casablancas has magazine looks and catwalk swagger in his genes (his mum was once Miss Denmark, his dad is John Casablancas, founder of the Elite Modelling Agency), while the band oozes that nebulous, conceptual thing called “cool”.

All of this begs the question of whether the follow-up album can tilt the axis of style / content firmly in the latter’s favour. If I’d written this review after one listen I’d have risked incurring the wrath of the Musical Style Police by delivering a verdict of an unequivocal “No”. The overall sound seemed to take lo-fi down to a new level; the drums sounded tinny, like they were recorded in a Bronx toilet; the dalliance with reggae on Between Love & Hate was disastrous; and the songs had “Is This It outtakes” written all over them.

But I was wrong. Room On Fire is designed to be listened to loud – it’s only 33 minutes long for goodness sake – and those criticisms above get flattened when the 11-song juggernaut is allowed to roar out of the speakers.

What Ever Happened? is a thrilling kick-off with a flickering guitar intro that bizarrely conjures up memories of Survivor‘s Eye Of The Tiger before giving way to meandering guitar lines above a heavy jangle while Casablancas’ quasi-vocoded rasp expertly propels the song along.

Reptilia keeps up the momentum and the adrenaline rush with as simple a chord progression and drumbeat as you could wish for and a louche chorus infused with spontaneity and punk sensibilities. Automatic Stop boasts a regimented, toy soldier rhythm and more masterful guitar lines, while single 12:51 has a hypnotic melody and hand-claps that shouldn’t work but do.

And the highlights don’t end there. Between Love & Hate, despite the cod reggae insertion, is redeemed by its funky beat and hillbilly guitar lick; The Way It Is is a driving rock song that careers into the distance after just over two minutes; and Can’t Win is a jangle-tastic feast, even if it is a curious way to finish an album.

As with Is This It, Room On Fire is far from perfect but, with its dwarf-like length, it cunningly doesn’t give you enough time to get irritated at the fact that Casablancas has no vocal range whatsoever or that there are the odd couple of anonymous tracks.

On 12:51 Casablancas asks himself, “Is it this stage I want?” It’s a bit late for that, matey – with this album The Strokes are here to stay.