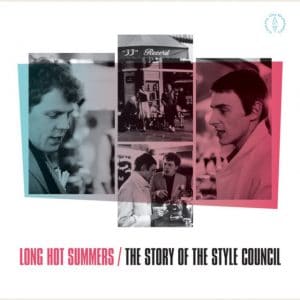 Sometimes the best artistic decisions can be the most poorly received. When Paul Weller announced he was breaking up The Jam on 30 October 1982, it seemed like lunacy. Here was a band at the height of its powers, with a dedicated fan base – yet Weller was musically restless, ready to forego all of that and move on. He had already been exploring the fringes of what The Jam were capable of, branching out towards jazz and soul – and he found he was fast outgrowing their rhetoric.

The Style Council were not the anticipated solution to his dilemma, but as they grew Weller set about revealing a warmer, more jovial side to his personality. He did this in the company of keyboard player Mick Talbot, vocalist Dee C Charles and drummer Steve White; a cornucopia of talented musicians sharing a willingness to look beyond conventional pop song structures and harmonies. They were not the stereotypical ’80s band, and stood out like a sore thumb on their Top Of The Pops appearances. Critics, many of whom were still smarting in the aftermath of The Jam’s split, were undecided in some cases and openly hostile in others.

Weller was adopting the ‘suck it and see’ approach, keeping an open mind to ensure the band was not placed under too much pressure. That explains the freedom felt throughout the band’s music, richly documented here in Long Hot Summers. The 37–song collection is complemented by an insightful documentary shown on the day of its release by Sky Arts, warmly recommended for fans that are able to see it.

The time is right for a reappraisal of the band. Looking back now, 30 years after their demise, The Style Council videos have a lot of smiles and understated humour, an indication of their freedom and positive state of mind. Looking outwards and upwards, the band did not take themselves too seriously. Their demeanour could not be further removed from the coiled spring of The Jam, a fact confirmed musically by first EP À Paris in 1983. Three of the four songs from that release are on this collection; Long Hot Summer itself, Party Chambers and The Paris Match. The dappled textures of Long Hot Summer are rather nice, and every bit as rebellious through its unexpected directions as The Jam were.

Revisiting the collection confirms that time has been relatively kind to The Style Council. While some of their songs are undoubtedly cheesy, the sense of musical freedom is invigorating, their clever use of instrumentation giving energy to the songs. Shout To The Top would not work without its effervescent strings, and continues to be a ray of light. Talbot’s keyboard often provides the bright window dressing for songs such as Down In The Seine and Wanted, in the latter case saving a rather sprawling number. Come To Milton Keynes also has lovely strings, its coda an enchanting array of swirling harps.

Co-compiled by Weller himself, this is a collection designed to showcase the band and what they were good at. There is a satisfying ebb and flow to the songs, moving from the softer hues of the warmly reflective My Ever-Changing Moods to the reckless pop bluster of Walls Come Tumbling Down.

The music is largely joyous and carefree. Speak Like A Child, the band’s first top ten hit, has an open-air feel, its sunny textures and lolloping rhythm matched by shimmering keyboards. A Solid Bond In Your Heart doesn’t have an immediate melody but the outgoing sax solo captures its positive, freewheeling energy. A Woman’s Song has Dee C Lee’s vocal to thank for its airy demeanour, and it is a shame she does not get more coverage in the set’s final artwork.

We are reminded of the band’s penchant for all things French (the accordion-laden Down In The Seine, The Paris Match) but also their references to urban sprawl in a tongue-in-cheek sense (Come To Milton Keynes). We explore the influence of Blue Note jazz artists through daring harmonic adventures, but also sharpened pop sensibilities and – towards the end – a few electronic experiments.

Weller is keen to keep the focus on the halcyon days of the band’s earlier work. For reasons left unexplored there is nothing from the 1990 album Modernism: A New Decade, perhaps an acknowledgement that by then the band’s reach was on the wane, both internally and externally.

The later material does indeed show how the band’s inspiration was beginning to level out. The Lodgers, How She Threw It All Away and Life At A Top People’s Health Farm are by no means devoid of riffs or appealing rhythms, but compared to the early hits there is a notable dip in urgency. The band’s cover of Joe Smooth’s Promised Land falls into line with the house music rhythms of the day, but sounds rushed and more than a little awkward.

These slight blots on the landscape are rectified by the choice of some unexpected gems, headed by two valuable rarities. The demo for My Ever Changing Moods blossoms thanks to extra orchestration, adding further shades and textures to an already richly coloured song. An extended version of Dropping Bombs On The White House proves to be a fine hour indeed for Steve White, dropping those incendiary jazz devices with a mixture of style and abandon. It only enhances the band’s jazz credentials, which could have been further indulged had Weller included more of their exploratory instrumental B-sides.

The title, though accidental, is relevant even now – a reminder that the fierce political streak running through some of the band’s later statements burns as brightly now as it did then. Talbot, in a recent interview with musicOMH, admits it got in the way of some of the band’s music, but events right up to today show how that side of their work retains its relevance.

To be fair including the later material would have unbalanced what is a faithful and effective anthology. Long Hot Summers serves a timely reminder that The Style Council were just as rebellious as The Jam, but their tools were less direct, with sports-casual clothes and an equally loose-fitting musical language. Their influence extends further than they are given credit for, and surely The Beautiful South and Everything But The Girl at the very least owe something to The Style Council’s continental take on an English soul and jazz band. Their blend of nostalgia and experimentation still makes a winning formula for a pop song these days. To sum up, Long Hot Summers is an overdue tribute to a quixotic but ultimately likeable band, and revisiting The Style Council’s brand of warmth proves a welcome tonic in this darkest of years.

The Style Council MP3s or CDs

The Style Council on Spotify