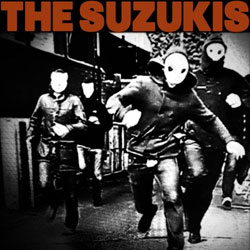 Wigan four-piece The Suzukis are under the apparent impression that they are the northern heirs to the Sex Pistols, shaking up the music scene with loud punk tunes and menacing stares. Of course, if you really want to escape the shackles of lumpy northern indie, you subvert it, like Everything Everything or Egyptian Hip Hop. Or you go down the Arctic Monkeys route and add wit, gritty realism and rhythmic intensity. What you don’t do is take lumpy northern indie and play it faster with a few hackneyed rock riffs added.

Opener Are You Happy With Yourself begins promisingly, singer Chris Veasey declaiming the title over simple jagged riffs like a Lancastrian Jaz Coleman. But as the song progresses, the more it becomes an empty slogan, adding no context or elaboration, just meaningless rhymes (“now you’re left upon the shelf”). It’s also the strongest track on a record utterly free of lyrical inspiration. “I’m a blank piece of paper… waiting for a pen to come down and write”, they sing on Really High. The chorus, repeating the word “really” several dozen times just in case you hadn’t noticed it’s the same melody as Blur‘s The Universal except sung over a cod-grunge riff, suggests the pen is still hovering somewhere out of reach.

Basically it’s beefed up Britpop. For all their protestations of punk purity, there is not one unconventional moment on the record. Back At The Factory may as well be titled We’re Working Class, You Know. Built In’s riff wouldn’t be out of place in a Darkness tune. Reasons For Leaving bounces along on another grunge riff, but the chorus melody is pure Oasis.

Granted, there’s little originality in any punk these days, but you can at least emulate, say, Gallows and make a decent fist of the fury. But The Suzukis are a well-tamed beast, caged by the very conventions they claim to break.

The Suzukis MP3s or CDs

The Suzukis on Spotify