The Triffids – Wide Open Road: The Best Of 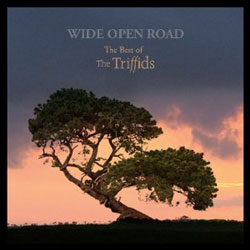 Although they were the archetypal cult band during their career, enjoying only the briefest sniff of mainstream acceptance, the Triffids’ reputation has continued to grow since their demise in 1989.

Add in the untimely death of lead singer and main songwriter David McComb (one of rock music’s great doomed romantics) in 1999 at the criminally young age of 36, and it is hardly surprising that the group has begun to attract more attention. McComb’s story may provide the backdrop to the Triffids, but it is the music he and his cohorts produced during their short career that is the real reason for the band’s longevity.

Active in various forms since the late ’70s, and in their early years releasing scores of independent cassettes (highlights from which can be heard on the companion release to this album, the daunting 10-CD box set Come Ride With Me), the Triffids were originally a muscular indie rock band with McComb coming on like a backwoods preacher in full flow.

This early part of their career is represented on this best of by tracks from their first album Treeless Plain, the extended plays Reverie and Raining Pleasure, and the single only Beautiful Waste. Although the Jill Birt voiced Raining Pleasure runs it close, best of the lot is the taut, insistent Hell Of A Summer, with McComb declaring ‘what you have sir, dispose of at your will, what you cannot have sir, you must kill’. The stilted politeness of the sir reference recalls the same effect used by Bruce Springteen in his chilling murder spree tale Nebraska.

The group’s greatest album (and a contender for best album of the ’80s) Born Sandy Devotional is represented here by four tracks. The compilation’s chronological order is knocked only briefly out of kilter by the use of Wide Open Road as the opening track, wholly befitting for the group’s biggest hit (and by a happy coincidence also one of their best).

The Born Sandy Devotional tracks demonstrated a great leap in the production stakes for the Triffids, with Graham Lee’s pedal steel guitar and Jill Birt’s keyboards adding layers of atmosphere previously absent. Fortunately they do not sound too dated, with the bleak suicide narrative of The Seabirds and the brooding melodrama of Stolen Property still hitting home hard.

The back-to-basics recording of the follow-up In The Pines could have used more representation here, with only the edgy Kathy Knows making the cut. That album also featured Born Sandy Devotional, a great fragment of a song that never made it onto the titular album and would have fitted in nicely here.

The remaining tracks are drawn from the group’s final two albums, their most problematic. Both Calenture and The Black Swan were swathed in a lush pop production style that at times threatened to bury McComb’s poetic despair under unnecessary instrumentation. The Calenture track Bury Me Deep In Love even showed up in an episode of Neighbours (for the wedding of Harold and Madge, fact fans), while the lush romanticism of Save What You Can comes perilously close to schmaltz.

Better by far are the sultry snapshot Too Hot To Move and the brilliant lyricism of Jerdacuttup Man, the latter finding McComb reaching back into prehistory for his narrative of a doomed man. With the benefit of hindsight it is tempting to read too much into lyrics such as ‘I had no luck in business and no luck in love’, but that would be doing McComb and the Triffids a disservice.

A much greater service is provided by this timely compilation, which hopefully will help introduce a new generation of fans to one of the late20th century’s most underrated bands and songwriters.

The Triffids MP3s or CDs

The Triffids on Spotify