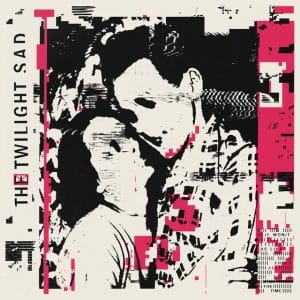 It Won’t Be Like This All The Time is an appropriately positive title for The Twilight Sad‘s fifth studio album. For, despite their reputation for unrelenting grimness, there’s an undercurrent of hope running through the Scottish band’s latest record.

For a lot has changed in the world of The Twilight Sad since 2014’s Nobody Wants To Be Here And Nobody Wants To Leave – founder member Mark Devine left the band last January, there was a change of label from Fat Cat Records to Rock Action (owned by Mogwai), and most heartbreakingly, there was the death of the band’s close friend Scott Hutchison of Frightened Rabbit in May 2018.

So there’s a sense of rebirth, albeit one undercut with a huge aura of sadness, from the opening swirly synths of [10 Good Reasons For Modern Drugs] – it feels urgent, almost yearning, with a determination in James Graham’s vocals as he proclaims “I called you all night, now the cracks all start to show”. Having expanded to a five-piece following Devine’s departure, the band’s sound seems to have become even more muscular and confident.

The loss of Hutchison is never explicitly referenced, but it inevitably hangs over the record – from Shooting Dennis Hopper Shooting’s lyrical reference to “take good care of your friends, take good care of yourself” to lines like “you can’t stand to be around me anymore, I don’t wanna be around me anymore” on the bracing I’m Not Here (Missing Face).

Yet despite the often gloomy atmospherics that coat the album, the intensity on display only serves to uplift. The introduction to the brilliant Auge/Maschine almost takes the breath away and is designed to play loud, while the chiming guitars of The Arbor brings to mind The Cure (who have long championed the band). VTr, meanwhile, may have an odd title, but its hopeful message of “there’s no love too small” is one that runs through the record and stops proceedings from ever becoming too downbeat.

Although Graham’s vocals are what make the biggest impression, there’s plenty of opportunity for Andy MacFarlane’s guitar skills to be demonstrated: whether it be the howling riff that opens the aforementioned Shooting Dennis Hooper Shooting, the frantic instrumentation of Let’s Get Lost or even the more restrained, sad chords of the closing Videograms, it’s a showcase for a man who has quietly become one of the most impressive guitarists of his generation.

There’s a sense running through It Won’t Be Like This All The Time that this could well become The Twilight Sad’s breakthrough album. While it’s a stretch to describe the record as ‘poppy’, it’s certainly their most accessible material to date, with songs like The Arbor, Videograms and Let’s Get Lost taking up residence in the head long after the record has stopped playing.

It seems unfair to describe this as The Twilight Sad’s masterpiece as, truth be told, they haven’t made a bad record in their career – but this certainly feels like a ‘moment’, the time where they step up and deliver a truly special album. It’s obviously unfair to compare them to Frightened Rabbit, but it feels like they’ve taken Hutchison’s legacy and vowed to build upon it. It may be only January, but there’s already been a place filled on that Best Albums Of 2019 list.