The Twilight Sad – No One Can Ever Know 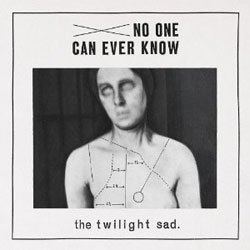 There are few greater pleasures in music than seeing a band develop from album to album, always changing their sound and challenging both themselves and their fans. The career of The Twilight Sad has been built on the principals of progression. Since the release of debut album Fourteen Autumns And Fifteen Winters in 2007, the Scottish group have gone from the primitive folk rock influences of their debut to the dark and densely atmospheric post rock of follow up Forget The Night Ahead. If the stylistic difference between the first two Twilight Sad records was pronounced then it is immediately dwarfed by the staggering step up that is their third album No One Can Ever Know.

Perhaps the departure of founding member bassist Craig Orzel in 2010 precipitated the change in direction but, more likely, the choice of famed dance producer Andrew Weatherall to produce the album was the decisive factor in harnessing the bands new sound.

Whereas Forget The Night Ahead was claustrophobic, foreboding, and very much dominated by wall-of-sound guitars No One Can Ever Know ramps up the darkness to unprecedented levels while aligning the groups gloomy rock to new electronic sounds.

The sound of No One Can Ever Know is much sparser and stripped back, based on nagging insistent rhythms and a nervy new wave pulse that runs throughout the album. Despite the adoption of electronics and synthesisers rather than sky scraping guitars the record still sounds immensely powerful, the band have sacrificed none of their ability to make widescreen anthemic music. Alphabet is a strong and strident opener with vocalist James Graham’s thick Scottish brogue rippling with emotion, there is something wonderfully portentous about the way he delivers lines like: “So sick to death of the sight of you now, safe to say I never wanted you more, and you asked for one more go.”

Dead City sees Graham straining at the very top of his range over a thrillingly driving rhythm carried along but a great fuzzy bassline that Peter Hook in his Joy Division pomp would have been proud of; Indeed, Joy Division/ New Order and Depeche Mode are reference points that can be heard throughout the record. The symphonic electronic rock of Another Bed could almost be a lost Depeche Mode track and those soaring analogue synths are once again to the fore in Don’t Look At Me. Fortunately, the immense power of The Twilight Sad’s music ensures that these forays into 1980s inspired electronic sounds never lapse into mere pastiche.

It is clear that this is not some exercise in haphazard experimentalism with some strange new sounds but a focused, considered and coherent collection. There is not an inch of fat present on a record that is brimming with taut, white-hot electronic rock.

Perhaps the most striking example of the bands new found obsession with synthesisers is saved for closing track and album highlight Kill It In The Morning. A pulsing dance floor influenced beat meshes with swirling guitars, synthesisers and James Graham’s menacing vocals to tremendous effect for a kind of grand industrial dance rock sound that is as brutal as it is exciting. There will be few more captivating sounds heard this year than Graham’s closing acapella line “What more do you need to know? It’s staying here well down below.” It makes for a fitting postscript on a thrillingly captivating album.

It seems to have become a cliché for rock bands to pronounce that are ‘going in a more electronic direction’ but, in the case of The Twilight Sad, it all feels incredibly natural and just another logical progression for a band that seem to be incapable of standing still. Who knows what direction they may go in the future but it would have to be very special indeed to top this hugely impressive comeback.