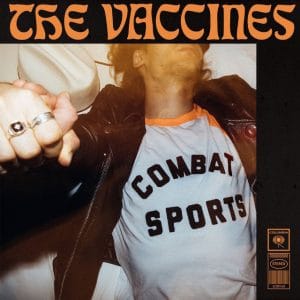 The Vaccines’ fourth album Combat Sports reaffirms their identity as a guitar band. Their over-hyped debut What Did You Expect From The Vaccines? led to them being absurdly touted as the “saviours of rock ‘n’ roll” but was actually rather good, while their next work, the equally ironically titled Come of Age, confirmed their status as one of the diminishing breed of guitar-based groups with a mainstream appeal.

Then came an unexpected flirtation with boyband pop (with front man Justin Young collaborating on songs with One Direction) and their synth-saturated third album English Graffiti signalling a change of tack.

Combat Sports is certainly no return to The Vaccines’ early surf-punk sound, but it does reinvigorate their indie-major rock credentials with its more muscular guitar edge and stronger backbeat in what is still a pretty polished production by Ross Orton. The album title seems to reflect the reported coming to blows of Young and lead guitarist Freddie Cowan on the last day of recording, while the cover shows grappling fists. And the music sure packs a punch.

Personnel changes may have had a revitalising effect. Original drummer Peter Robertson has been replaced by Yoann Intonti with touring keyboardist Tim Lanham becoming a full member of the band, so with bassist Árni Árnason The Vaccines are now a five-piece. At only just over half an hour long, Combat Sports is their shortest album yet, with none of its 11 tracks straying over four minutes, all in bursts of compact energy. Each song has a short guitar solo, while riffs and hooks abound, in stories of combative love and sex couched in Young’s characteristically wry lyrics.

The opener Put It On A T-Shirt, about a dysfunctional relationship, is a big, bold, catchy number with a pulsating beat. Lead single I Can’t Quit is a similarly high-octane tune with bristling guitar as Young declaims of a love gone sour “I’m over it” – or is he, as the title suggests it’s an addiction hard to give up?

In Your Love Is My Favourite Band the lonely singer waits expectantly for love in the night – “I turn my radio on for you, baby / To hear the song you wrote for me” – while in Someone To Lose he is perversely desperate for passion: “We’re not good for one another / But I’m begging, I’m begging of you / I wanna have someone to lose.” Both songs are reminiscent of early ’80s new wave pop-rock like Blondie or The Cars. Out On The Street – a wintry affair where love has frozen over – and Take It Easy – a hymn to indolence – on the other hand suggest ’70s power pop.

In Surfing In The Sky love soars upwards with a blast of positivity, while the vaguely romantic Maybe (Luck of the Draw) is brightly upbeat in a non-committal way: “Maybe I want to spend my life with you.” Young American is the one track where the pace drops for a couple of minutes, with Young cooing sweet nothings into the ear of a loved one.

The tempo ups again with the bouncy Nightclub, danceable rock à la Franz Ferdinand, where desire throbs insistently: “She said she only thinks of love like a long weekend / But she might jump in if I show her to the deep end.” But in the raucous Rolling Stones the cynicism of “the art of deception is a contact sport” is countered by the affirmative “the world should revolve around her”, bringing the conflicts of the album to some kind of harmonious resolution.