The Vaccines – Come Of Age 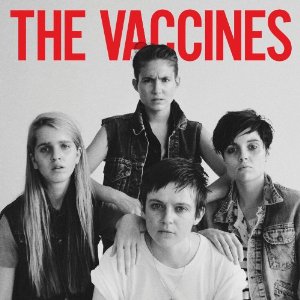 It only seems like yesterday critics were showering The Vaccines with praise, claiming they were the ‘saviours of guitar music’ and the next Arctic Monkeys. In fact, it has been almost two years since the London quartet released their debut single, the thrilling Wreckin’ Bar (Ra Ra Ra), lasting all of one minute and 24 seconds. The song set them apart from anything else around at the time and finishing third in the BBC Sound of 2011 poll only increased the fervent anticipation ahead of their debut record.

The promise of What Did You Expect From The Vaccines? was so high that it was never likely to live up to the hype. And unsurprisingly, it didn’t exactly meet the wild conjecture – it certainly won’t be considered a classic alongside Arctic Monkeys’ game-changing debut. However, while The Vaccines’ debut was no classic, it was hugely catchy and enjoyable. Not wanting to hang around, the four-piece have returned with their second LP, entitled Come Of Age, just 18 months after their first hit the shelves.

Releasing a sophomore album so quickly after the first seems to be all the rage these days, especially among new bands who want to make the most of the hype, rather than fade into obscurity. But there is enough about Come Of Age to dismiss the possibility of it being a shameless cash-in. The album kicks off with the first single, No Hope, which starts with a furious burst of guitars, before Justin Young sings nonchalantly: “Oh I could bore you with the truth/ about an uneventful youth/ or you could get that rap from someone else.”

It possesses all the traits you would expect from a Vaccines song, as does the supremely infectious Teenage Icon – which also just happens to be the second single from the album. It’s probably the one song that would fit in snugly on What Did You Expect…, not that it matters, as you’ll be too busy singing along to it to realise. Bad Mood is another that will surely become a live favourite, with its sharp punk riff and unassuming, but oh-so addictive chorus. Then there’s Ghost Town, an atmospheric, bass-led track that has already become a hit with fans on the live circuit.

Come Of Age is by no means just a rehash of The Vaccines’ debut, though, and as the title suggests, there is much more maturity about the songwriting. The ’60s-indebted love song, I Always Knew, demonstrates a much greater song craft from the quartet, with its rumbling beat, squirming riff and heartfelt lyrics. Aftershave Ocean is quite step away from the standard no-nonsense Vaccines formula, while the lyrics on I Wish I Was A Girl intriguingly subvert the normal conventions of an all-male rock band singing about a girl.

Unfortunately, just like The Vaccines debut, there is very little to really make you stand up and take notice. Nothing on Come Of Age could necessarily be labelled bad, but there is nothing to really get excited about, either. Take Weirdo, which sounds like a faux attempt to re-create a broody Nirvana-esque atmosphere. While All In Vain is just painfully dull, with a whiny chorus that has virtually no redeeming features.

Where The Vaccines found time to record Come Of Age is anybody’s guess – they have toured almost incessantly since they were discovered – but it does show a progression of sorts from their debut effort. However, like their first album, Come Of Age is nothing more than average. It won’t blow your socks off, but it’s easy to listen to and a lot of fun. Whether The Vaccines will ever write an era-defining album is questionable, but what they do, they do well.