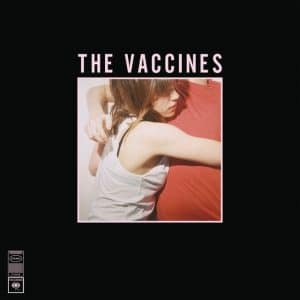 It’s difficult to pinpoint exactly why The Vaccines are under such a weight of severe, loose-tongued criticism. Perhaps it’s the gradually-increasing cynicism towards ‘Sound of [insert year]’ polls, the fairly routine process of appearing on Later… with Jools Holland and automatically being labelled as a certainty for success. Critics – certainly not the general public – have dismissed the band’s debut album prior to a single listen. And despite the occasional duff lyric and monotonous set of chords, it’s not as ghastly as some make out.

This London four-piece have, without intention, walked into the trap of being this year’s musical punch bag. Whilst it’s obvious that they’re little more than four guys who happened to attract the attention of major labels and radio executives, in little time they’ve become the band it’s cool to hate. There’s an evident intolerance of “bland”, unimaginative rock music – the kind that Kings Of Leon or White Lies are accused of harbouring. This debut is somewhere in between the hysteria and atmosphere of Glasvegas and the indifferent moodiness of White Lies. That’s not a good thing – certainly not if you’re a music snob. Nevertheless, there are moments within this patchy, multi-flawed effort that give a better impression.

Opener Wreckin Bar is crass, raucous – nothing but two minutes of relentless fun. Norgaard and Wolf Pack are notably similar to the casual immediacy of Best Coast (last year’s punch bag, it ought to be noted). Some songs – were they to be shrouded with the kind of fuzz and reverb that many American acts identity with – would be hailed by the same people who are currently shooting the verbal bullets.

This is the first guitar-based record in a very long time that’s got huge commercial viability and a slight bit of integrity. The Vaccines are a band beloved by both the masses and the night-time DJs – and that’s rare. Post Break-Up Sex and Blow It Up are both potential festival anthems. Family Friend, despite its dreadful lyrical content (“Does everybody really feel as high as kite? Well I don’t really know if they do, but they might”), is the kind of swansong you associate with waving flags and a July sunset. Contrary to dismissive rhetoric, it’s easy to see the current haters becoming only more frustrated.

One thing’s for sure though: The Vaccines, if they do represent a commercial revival of guitar music, aren’t the kind of groundbreaking band we’ll be looking back on in 10 years’ time. If indeed songs like If You Wanna pierce through the thick mould of daytime radio playlists, allowing for greater, more intelligent guitar-based acts to surge forward, we should be thankful. But much of, if not all of What Did You Expect From The Vaccines? suffers from a complete lack of intelligence, candidness or originality: elements that help make guitar-based music interesting. That stark fact goes out the window though if this thing sells by the bucketload.