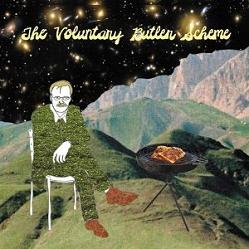 It’s second album time for The Voluntary Butler Scheme, aka Rob Jones – and with it, a slightly more serious approach. This is something of a musical risk, for the meal-themed concept album At Breakfast Dinner Tea had at its centre a wry, endearing outlook, refusing to take itself with anything other than a pinch of salt. Even in title alone, The Grandad Galaxy suggests Jones has gone for something much more straight faced.

That is largely true, though happily he can’t resist the odd humourous lyrical vignette. To The Height Of A Frisbee muses on how “if it’s easy to be young at heart, then why do I feel so old?” Astro, too, breezes in to view with its talk of “living my life on the moon”, due entirely to the fact that “I’ve been looking for a little more elbow room”.

The album gets off to a strange and almost world-weary start. The vocals are distant, shrouded in a vocoder, while the beats are quite slow and lazy. Sky Shed threatens to get busier, chopping up riffs and throwing them around, but soon peters out into nothingness. It’s Astro that sets this right, with a breezy riff bringing some hope to all that talk of lunar living.

Later on Jones introduces a bit more self conscious hip hop working, leaning towards the sound of early Mr Scruff as he does so, but with more focus on the pop song side of things. The appealing weirdness of Manuals suggests a song written and performed underwater. Umbrella Fight, too, saunters out in carefree fashion, though wraps up its business rather too early.

At times there is too much going on in Jones’ sound world, the ear pulled this way by weird sounds, quirky samples and oddball references, but though this can be overwhelming on first listen, in the long term it leads to more musical interest. A more focused approach might lead to songs that stick more firmly in the memory, but there is a sense of progression in the way Jones works his material.

An intriguing second long player, then, that suggests The Voluntary Butler Scheme might well be on the verge of getting paid for his musical efforts. It would be well deserved, as you may find you’re hearing this music a lot more than you anticipated.

The Voluntary Butler Scheme on Spotify