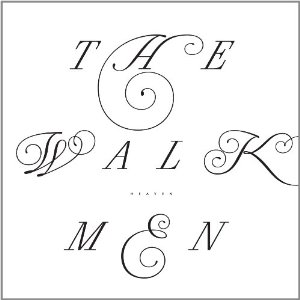 Fans of the Malcolm Gladwell school of Pop Science will be well acquainted with the notion that true mastery of any art form is simply a question of putting in more than 10,000 hours practicing your craft. The Walkmen, now together for 10 years, seemed to come pretty damn close to that figure with their majestic 2010 album Lisbon. Two years later it appears that their upward trajectory shows no signs of abating. We’re well beyond the magic 10,000 barrier with this disc.

Heaven follows a whirlwind two years for the band when they occupied some prestigious support slots including supporting Arcade Fire, drawing the evangelical praise of Elbow’s Guy Garvey and touring with Fleet Foxes introduced them to producer Phil Ek, who takes on similar duties here. This album loses none of the vitality of Lisbon, but the atmosphere is more grounded and romantic. Parenthood and the confidence that comes from surviving a decade when your 2002 New York “New-New Wave” peers have floundered by the roadside is surely a contributing factor to the confidence behind this album. Melancholy still hangs in the air, but like Roy Orbison or Nick Cave at their most reflective, it’s a thing of beauty rather than regret.

Their New York roots feel more like a thing of the past. Their trademark line in sharp suits and Hamilton Leithauser’s elegant crooning could easily place them in a late night Las Vegas bar, together the sense of swagger and drama that’s associated with the city. Despite the fragile vocals and the shimmering echoes of Paul Maroon’s guitar work there’s a tension behind the beauty – a sense that, at any stage, things could really kick off.

We Can’t Be Beat begins the album a slow-burning backing accompanied by Leithauser’s voice cutting though the airwaves like a blowtorch through butter. Hearts and love figure prominently in the song titles and lyrics themselves, but there’s not an indication that things have gone soft – Maroon’s guitar on Love is Luck has lost none of it’s potency and the lyrics of highlight Heartbreaker proudly proclaim “I’m not your heartbreaker – some tender ballad player” and explains to any cynics that “It’s not this singer, it’s the song”.

Tracks such as Southern Heart display Leithauser’s real strength – crystal clear and intimate vocals with the slightest of echo to suggest he’s the only one in the room. This doesn’t meant to say any of the more bombastic tracks have been ejected – witness Nightingales, a trademark Walkmen track which sees everyone in full-flow. Before you know it No-One Ever Sleeps starts to wind things down with a lullaby that could only be sung to a lounge full of broken hearts railing against the dawn with a tumbler of whiskey in their hand.

It’s taken 10 years for The Walkmen to reach fully-fledged maturity and with any luck Heaven will see them emerge as headliners in their own right. The device from which they drive their name may be consigned to history, but the best of this band might well yet be to come. This disc proves that their ascension to lofty heights is complete and something heavenly indeed.